New Orleans is known for many things: Mardi Gras, voodoo, its rich history, and perhaps most importantly--food. Like any other major city, New Orleans has its share of tourist traps and great restaurants. The recommendations below will steer you towards the the city's rich and diverse culinary landscape. 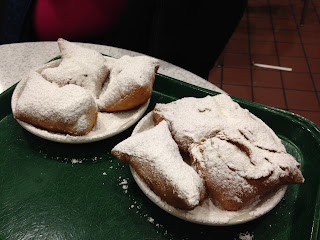 Café Du Monde: We’re starting off with the obvious, but sometimes what’s obvious is best. It’s New Orleans, it’s beignets, don’t overthink it. Stroll on down Decatur Street and stop when you see the famous exterior. Go in, order the beignets, and blow powdered sugar on your friends and family. Enjoy a café au laut and watch the world go by. If you walk out of there and you’re not covered in powdered sugar, you’ve done it wrong.

Killer Poboys: Nestled in the back of the Erin Rose Bar is one of the best kept secrets of the New Orleans culinary scene, Killer Poboys. The Poboy is a traditional New Orleans sandwich consisting of some kind of protein, generally roast beef or fried seafood served on New Orleans style French bread (there’s an entire festival devoted to them). Done right, the poboy is a blank canvas for culinary innovation. And Killer Poboys does them right.


Coquette: Located just near the famed Commander's Palace, Coquette is an upscale neighborhood restaurant that exudes the best of New Orleans cuisine--quality local ingredients cooked simply and beautifully. Order off the al a carte menu or just order the tasting menu and put yourself in the capable hands of chefs Michael Stoltzfus and Kristin Essig.

Peche: New Orleans chef and restaurateur Donald Link has been on a roll these past few years. In 2006, he opened Cochon, an ode to Cajun cooking, located in the Central Business District. In 2013, Link decided to conquer the New Orleans seafood scene with Peche. The James Beard Foundation named Peche the Best New Restaurant in America in 2014. We've eaten there several times and the menu highlights Gulf seafood at its absolute best.


Compere Lapin: After participating in Top Chef: New Orleans, St. Lucia native Nina Compton relocated to the Crescent City and opened Compere Lapin (Brother Rabbit) in 2015 in the Warehouse District. The result, which we've reviewed here, was a stunning meal that fused New Orleans with the Caribbean, culminating in a curried goat dish that you'll never forget.

Bywater American Bistro: Last year, Compton opened a more casual neighborhood spot in the Bywater. Bywater American Bistro has some truly standout dishes like rabbit curry and smoked ricotta angolotti as well as a strong cocktail menu. Either of one of these restaurants are worth a visit.


Saba: First at Shaya and now at Saba, chef Alon Shaya has brought upscale Israeli food to New Orleans. The hummus is delicious, you won't stop eating the pita, the cocktails are well-done, and the lamb kabobs are rich in flavor. Saba is a ways up Magazine Street, but well-worth a visit.

Next week we'll be back with some stuff to do when you're in New Orleans.

Just a reminder: the 11th Annual DGA Crawfish Boil is March 7, 2020 at Maison Lafitte in Mandeville, Louisiana. We hope to see you there!
Posted by Douglas A. Green at 10:00 AM