A few years ago, our friends the Mighty Pelicans recorded "Better Call Doug" a song in honor of DGA's very own, Doug Green. The song is available below along with pictures from Crawfish Boils Past. Enjoy!

Some More of Olive & Mabel

Back at the beginning of the pandemic, we shared some dog videos from UK announcer Andrew Cotter. Then in September, we shared a few more. Marshaling all of his announcing prowess to the task of gently mocking his dogs, Cotter has developed a loyal following, gotten a book deal, and reminded us all just how much we love our dogs--no matter how much grass they eat.

Here's a few more of his videos that have come out in the meantime. Enjoy! 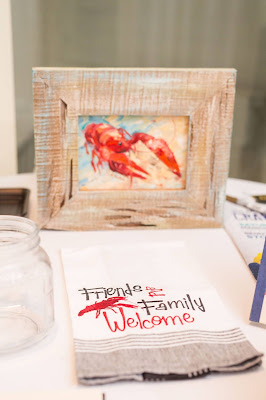 Normally, this would be the time when we'd announce the date and theme of our yearly crawfish boil. There is, however, nothing normal about the present and we regret that there will not be an in-person crawfish boil this year.

HOWEVER, just because there won't be an in-person boil this year doesn't mean all is lost. Keep an eye out in the mail for this year's T-shirt and an invitation to join us next year at the crawfish boil. By then we all should be vaccinated and it will be safe for us to gather again. We are looking forward to it as much as you are. 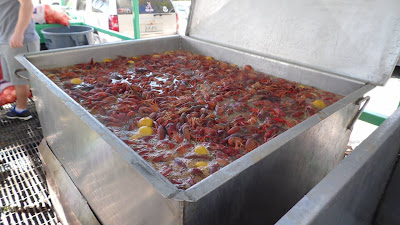 Stay safe and wear your masks!

2020 sucked. But now that it's 2021, that means only one thing--king cake season is upon us. And while we're still in the midst of a pandemic, that doesn't mean we can't enjoy king cakes, provided we do it in the comfort of our own homes with our pod or somewhere outside appropriately socially distanced.  Hell, we could all just buy king cakes separately and eat them over Zoom together. However we enjoy king cakes, let's do it safely.

King cake season lasts from January 6 until Mardi Gras. Why January 6? January 6 is the Feast of the Epiphany, celebrating the visit of the Three Magi (or Kings) to the infant baby Jesus. The first king cakes appeared in France during the Medieval period as a way to celebrate this important moment in the Christian calendar. They soon became an important feature of Carnival (otherwise known as Mardi Gras).

When the French came to New Orleans in the early 17th century, they brought their holidays and traditions with them. Explorer Pierre Le Moyne d’Iberville landed on the coast about sixty miles south of present day New Orleans on March 2, 1699—the day before Mardi Gras. The holiday and the subsequent French colony stuck.

The king cake, however, did not take hold until the early 1870s. French immigrants brought their king cake recipes with them and in classic New Orleans fashion, a new tradition merged with the old to create something wonderful. It took until about 1950 for the king cake to become a popular staple of New Orleans cuisine. In the past decade or so, king cakes have really come into their own. Popular interest in all things New Orleans grew after Hurricane Katrina and next day shipping have allowed king cakes to be shipped across the country, spreading their influence and deliciousness.
Now let’s talk about the cake itself. The King cake began as a circular bread dough topped with sugar with a bean inside. Over the past several hundred years, however, the king cake has evolved into a sweet cake covered with sugar and icing. The dough, previously hollow, is now braided and stuffed with cinnamon, cream cheese, or other fillings.  The colors atop a King cake are the same as the ones of Mardi Gras—purple for justice, green for faith, and gold for power.

King cakes also feature a small plastic baby hidden somewhere in or underneath the cake. Tradition holds that the person who finds the baby is responsible for buying the next cake. Some claim that the baby represents the baby Jesus and that McKenzie's Pastry Shoppes, a New Orleans area bakery, were the first to put the baby in the cake. In 1990, McKenzie's owner Donald Entringer Sr. denied that the baby had anything to do with Jesus. He told the New Orleans Times-Picayune, “I've heard people say it's supposed to represent the Christ Child, but that's not true. Why we picked this, I don't know. It was cute. It was just a trinket that happened to be a baby.” Whatever the truth may be, watch out for the baby when you bite into your first slice of King cake.

Unsurprisingly here at DGA, everyone has their own king cake preferences. Bill is a big fan of the King cakes from Butter Krisp Diner in Covington. He prefers homemade king cakes and ones filled with strawberry cream cheese.

Benson has a lasting affection for the king cakes once made by McKenzie’s. Luckily, the Tastee Donut chain in-and-around New Orleans purchased McKenzie’s old recipe and sells them at their stores. McKenzie’s consists of a simple brioche without cinnamon or filling. There’s only colored sugar topping the cake.

Matt prefers the Mandeville Bake Shop because it's near his house, though the best one he’s ever had came from Randazzo’s.

Doug’s favorite king cake is whatever one appears at his house.
Posted by Douglas A. Green at 10:00 AM No comments: