You want me to eat what? An Introduction to Crawfish

Posted by Benson
My wife Liz was born and raised in northern Indiana, so prior to marrying a native New Orleanian her only experience with “crayfish” was watching the little blue critters dart around in the creek behind her house.  Needless to say, she wasn’t overly excited about her first DGA crawfish boil.
I think it had more to do with wanting to impress my family than the prospect of eating crawfish, but the poor, delicious little mud bug took all of the blame.  Liz became convinced that she wouldn’t be able to eat them.  I heard everything from “They look like bugs,” and “They’ve still got eyes,” to questions about why the crawfish are bright red and concerns about being able to peel them properly.
Luckily, I’d been enjoying crawfish long enough to know that I’d only have to peel her five or so freshly boiled crawdads before she’d be plucking out tail meat like a pro and asking for more.  Liz has since come to eagerly anticipate the annual boil and this year several of the Miller crew are even coming down from Indiana.  But I suspect that a few of our friends from out of state may have some of the same questions about crawfish, so here’s a little background on our tasty friend.
Not only are crawfish almost ubiquitous around the world (species can be found all across North and South America, Scandinavia, Africa, Asia, and elsewhere), but they are eaten almost anywhere they can be found.  Native Americans have been enjoying crawfish for centuries.  In 1606 Captain John Smith reported that in Virginia, “great craw-fishes…have been taken in great quantities.”  In Australia, archaeologists have found fossil records of crawfish (locally called yabbies) eaten by aboriginal Australians at least 28,000 years ago.  The crawfish was prized by Emperor Maximilian I of Austria, Queen Elizabeth I of England, and Napoleon Bonaparte of France.  The Maori of New Zealand even have a saying, “Ka whe te koura,” “the crawfish turns red in hot water.”
In America, commercial interest in crawfish dates to the early 19th century.  By the 1880s crawfish were in such high demand in New York that they were imported from fisheries across the country.  An eight mile stretch of the Potomac River alongside DC accounted for a half-million crawfish shipped there every year.  Crawfish are even celebrated outside of Louisiana.  As best can be reckoned, the oldest crawfish festival in America dates to 1951 in a town called Tualatin, just ten miles north of Portland, Oregon.
Even though crawfish are enjoyed all across the United States and all over the world, no place on earth is as closely associated with crawfish as Louisiana.  The crawfish is the state’s crustacean and Breaux Bridge, Louisiana is the crawfish capital of the world.  In the Atchafalaya basin of south Louisiana, crawfish is a fundamental facet of Cajun culture.  Louisiana is also by far the country’s largest producer of crawfish.  Louisiana accounts for at least 90 percent of U.S production.  In 2009 alone, 1,119 farmers and 1,559 fishermen produced 98.1 million pounds of pond-raised and 15.4 million pounds of wild-caught crawfish.  And believe it or not, it is estimated that up to three quarters of Louisiana’s crawfish are produced for local consumption.  The reason is simple: they taste really damn good!
The crawfish you’ll be enjoying this March are the best kind: Louisiana red swamp crawfish, locally produced in a sustainable, environmentally friendly aquaculture and rated as a “Best Choice” by the Monterey Bay Aquarium’s “Seafood Watch” list.  They’ll be boiled live, served up steaming and dripping with a naturally succulent flavor accentuated by the perfect blend of traditional Cajun seasonings.
Liz worried my ear off for weeks before her first crawfish boil.  She may have been convinced that she wouldn’t be able to eat “crayfish,” but I knew that the little mud bug would speak for itself; it had been charming people the world over for centuries.  Sure enough, half-way through her first pound and mid-way into her second beer she remarked, “They’re just like little lobsters, only better!”
Next week I’ll give ya’ll a little background on the tradition of crawfish boils so you’ll know what to expect when you get here.  I’ll also give you some pointers on how to peel crawfish.  It’s easier (and more delicious) to learn by doing, but a few quick tips will allow you to hit the ground running.
Posted by Douglas A. Green at 1:16 PM No comments:

This Year’s Crawfish Boil is Bigger than Ever!

Every year at the start of the Louisiana crawfish season the DGA team hosts its annual crawfish boil for family and friends. What started out as a friendly get-together between the DGA team has been getting bigger and more exciting every year. This year we'd like to encourage more of our friends from out of state to help us celebrate this unique New Orleans tradition. There's going to be more good food, more beer, and of course more crawfish than we've ever had before! Plus, LIVE music performed by Tuba Skinny!

Location: As always, we're going to be at Friends Costal Restaurant in historic Madisonville, LA, right on the bank of the Tchefuncte River. 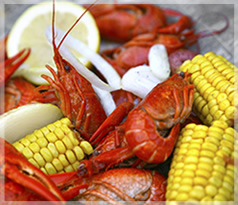 This year Tuba Skinny will be performing live music at the crawfish boil! This fantastic local band will be treating us to the traditional sounds of old New Orleans blues and dixieland jazz. You can check out Tuba Skinny on their blog.

For those of you that are from out of town, March is the perfect time to visit New Orleans. The weather is beautiful, there's a festival around every corner, and the first crawfish of the season are hitting the pots!  Plus, this year the crawfish boil is the same week as Mardi Gras! Fat Tuesday, the climax of the Mardi Gras season, is on March 8th, the Tuesday before the crawfish boil.

The month of March is chock full of local arts, music, craft, and food festivals all around the New Orleans area. There's the French Quarter Wine Festival, the Great Alligator Race, the Louisiana Oyster Jubilee, and many more! Many of the festivals haven't set precise dates this far out, so keep an eye on the blog for updates.

Take a look at this website for a schedule of Mardi Gras parades.

You can find information about hotel accommodations here.