Last week, we began our look at the New Orleans Saints offseason by focusing on re-signings of Drew Brees, Andrus Peat, and several other players. This week, let’s turn our attention to the two big players—one on defense and one on offense—that the Saints brought in from outside the organization to bolster the roster in the waning years of Brees’ career.

The Saints wide receiver depth outside of Michael Thomas was nonexistent. Thomas led the team with 149 receptions. Ted Ginn, the ostensible number 2 wide receiver, had 30. Tre’Quan Smith was third with 18. Sanders fits the bill as a viable receiving option behind Thomas.

Last season, Sanders split time between Denver and San Francisco. In 17 games, he had 66 receptions for 869 yards, including a memorable game against the Saints where he torched the defense for 7 receptions, 157 yards and a touchdown. Throughout his career, Sanders has ably served as a second wideout for receivers like Antonio Brown in Pittsburgh, Demaryious Thomas in Denver, and now for Michael Thomas in New Orleans.

Now that Sanders is in his early 30s, health and age-related decline are a concern. He missed four games in each of 2017 and 2018 and was only ever a full-time starter for three seasons, from 2014-2016. The Saints investment in Sanders, however, is modest (two years and $16 million) and he fills a much needed hole on their roster.  Grade: B+

A familiar face returns to the Crescent City. The Saints selected Jenkins with the 14th overall pick in the 2009 draft. He spent the first five seasons of his career in New Orleans. Over time, however, Jenkins fell from favor amidst the ever-changing array of defensive coordinators in the early 2010s—in his career with the Saints, Jenkins played for Gregg Williams, Steve Spagnuolo, and Rob Ryan—before departing as a free agent after the 2013 season. The Saints did not even offer him a contract.

Jenkins signed with the Philadelphia Eagles where he became a standout defender and played in their Super Bowl victory over the New England Patriots. He also was bitter towards the Saints for the way they had treated him, once flipping off Sean Payton during a game between Philadelphia and New Orleans.

Payton later admitted that letting Jenkins leave was one of the biggest mistakes of his coaching career and he and Jenkins mended fences. The reconciliation paved the way for Jenkins return this offseason.

While the Saints would like to rectify their mistake in letting Jenkins go, they paid too high a price to facilitate this reunion. If Jenkins were still the 27 year old safety with a lot of upside, this deal would make a lot of sense. Unfortunately he’s not. Jenkins will be entering his age-33 season making top-flight safety money. There’s very little room for excess value here. If Jenkins underperforms, he’ll be an expensive overpay. If he plays well, then the Saints derive little benefit since they’re paying him at the top of the market. Grade: C
Posted by Douglas A. Green at 10:00 AM No comments:

Even with everything going on in the world, the NFL officially began its free agency period last Wednesday. News of signings, however, began to leak on Monday as the league’s legal tampering began and free agents could officially contact and visit other teams. As usual the Saints, despite being close to the league’s salary cap were once again busy on the free agent market—both in terms of re-signing their old players and bringing in free agents from elsewhere. 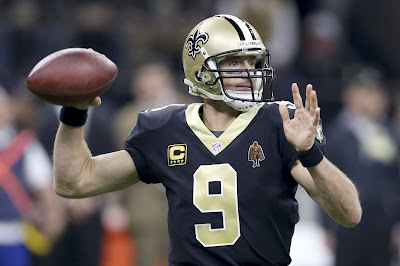 The Brees re-signing was merely a formality. Over the past few years, Brees has made it clear that he would only re-sign with New Orleans or retire. In reality, this is a one year deal worth $25 million with a voidable year tacked on for the purposes of spreading Brees’ cap hit across multiple seasons and giving the Saints more flexibility to bring in other free agents. If Brees wants to play in 2021, he’ll sign a contract that looks exactly like this one.

There was little reason to think Brees would retire. Even at age 40 when quarterbacks generally decline, Brees was better than ever. He led the NFL in completion percentage at 74.3%, just 0.1% short of his career mark of 74.4% set in 2018. Age has cost Brees the ability to throw the ball down the field, but he has compensated by becoming an ultra-accurate short and intermediate range passer. In only 11 games last year, he threw for 2,979 yards with 27 touchdowns and only 4 interceptions. Grade: A

This signing is a little more puzzling. The Saints seemed all-set to move on from their former first round pick. New Orleans already has Larry Warford, who was signed a few years ago for big money, and Nick Easton, a former starting center, who filled in at guard last year when Peat was hurt. He’s missed games over the past two seasons due to injuries and with the Saints tight against the salary cap, it seemed like Peat’s time in the Big Easy was over. Maybe they’re getting ready to move on from Warford instead? Additionally, there did not seem to be a big market for Peat, who now has the fifth largest annual salary ever given out to a guard. Grade: C 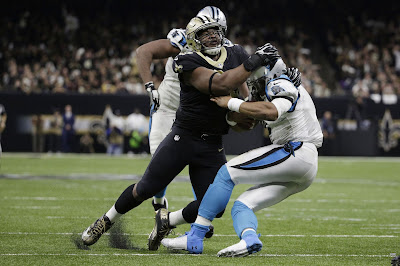 Onyemata’s Cinderella story continues. Born in Lagos, Nigeria, Onyemata never played football until he emigrated to Winnipeg for college. After four years in college, the Saints selected him in the fourth round out of the University of Manitoba. Early in his career, Onyemata was a backup defensive lineup who generated a few sacks per season and mostly was used in run-stopping situations. In 2019, however, he filled in for the injured Sheldon Rankins, starting all 16 games. He had 3 sacks, 11 quarterback knockdowns, and continued to play well against the run, helping New Orleans finish with the 5th ranked run defense according to DVOA. Grade: B

The Saints re-signed their long-snapper, maintain continuity with punter Thomas Morstead and kicker Wil Lutz. Good for him.  Grade: B
Posted by Douglas A. Green at 2:39 PM No comments: 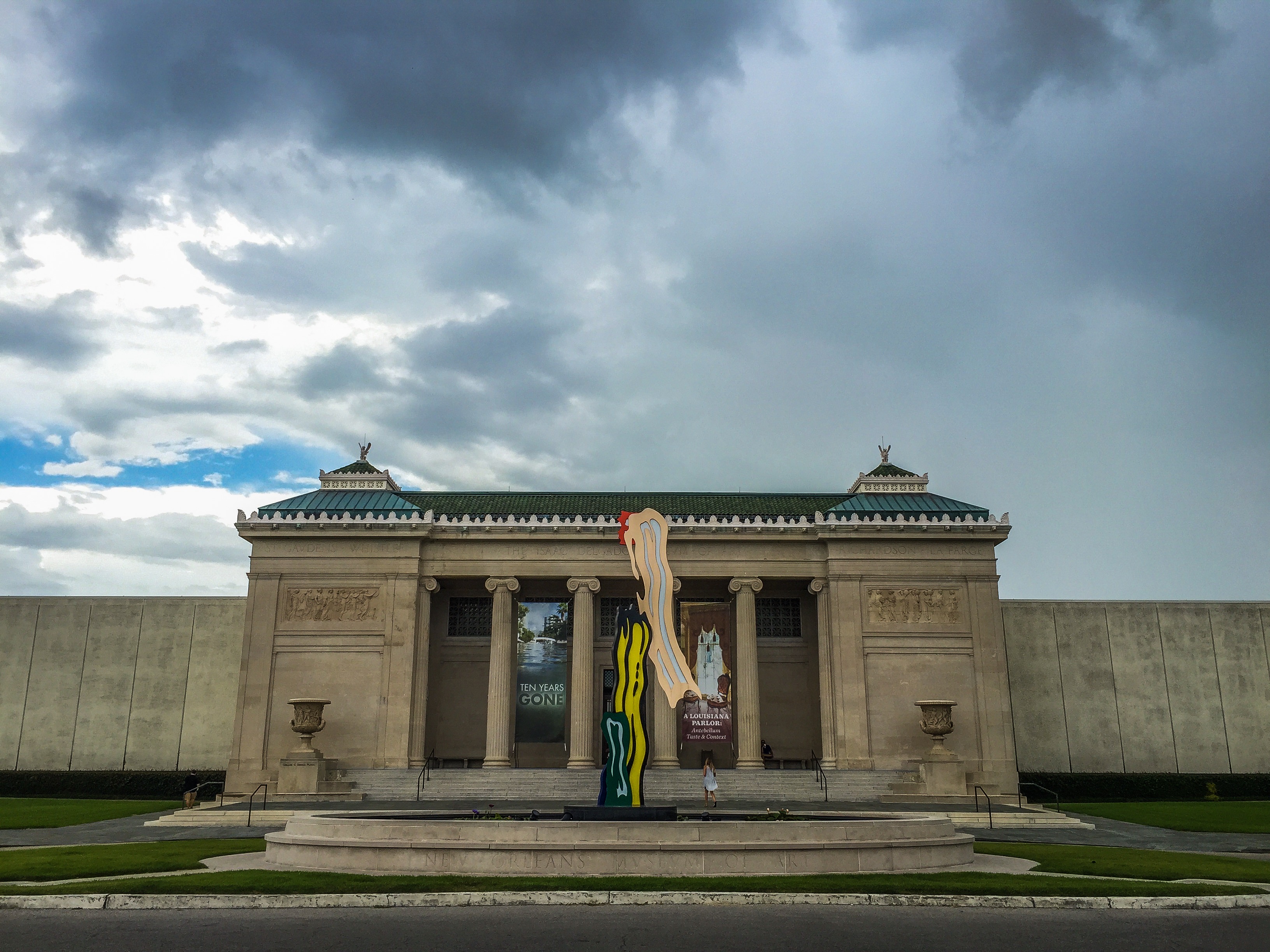 The New Orleans Museum of Art was created by sugar baron Isaac Delgado in 1911. Delgado felt New Orleans needed an art museum so it could join the ranks of America's great cities. Currently the museum houses over 40,000 objects from the Renaissance to the present. Their collections are especially strong in the areas of 18thand 19thcentury American and French furniture. It also includes a wide range of European and American art with pieces by Degas, who lived in the city from 1871-1872, Monet, Renoir, Picasso, Matisse, Gaugin, Jackson Pollack, and Georgia O’Keeffe.

As of today, however, the museum is closed because of coronavirus. The museum, however, has teamed up with Google Arts to provide virtual tours of its collections. Follow the link here.

It may not be the same as going to the museum, but it's the best way to view the collections safely.

Crawfish Boil 2020: How To Peel Crawfish 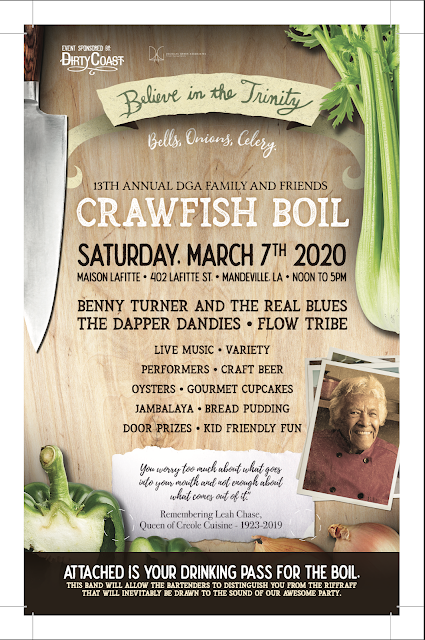 Now to get you properly prepared, here’s Benson to teach you all had to peel and eat crawfish. 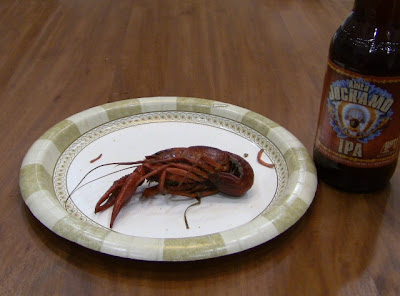 The process is relatively simple, and a well-coooked crawfish should give even inexperienced folks little trouble. Before you start peeling, remember that crawfish boiled live typically have curled tails, such as the one in the image above.  Those that were dead when they went in the boil (there’s always a few) have flat tails and mushy meat.  You can toss those suckers into your pile of shells if you like.

Y        ou might have heard of the twist, pinch, and suck method of peeling crawfish.  This refers to twisting off the head, pinching the tail, and sucking the head.  This is the basic method we’re going to learn, although sucking the head is entirely optional.  Most crotchety Cajuns suck the heads to put newcomers off their crawfish, but there’s also a culinary reason to do it and I’ll explain that at the end.

Although these colloquial terms are wildly inaccurate in terms of a crawfish’s anatomy, the two basic parts you need to know about are the “head,” the main body of the crawfish, and the “tail,” the segmented abdomen of the crawfish.

To start peeling, grasp the head in one hand and the tail in the other.

Next, twist the head and pull it away from the tail.

At this point, you can pinch the tail and pull out the meat with your teeth, but that takes some crawfish experience.  Being new to peeling crawfish, you will have more success if you peel the first segment of the shell off of the tail. 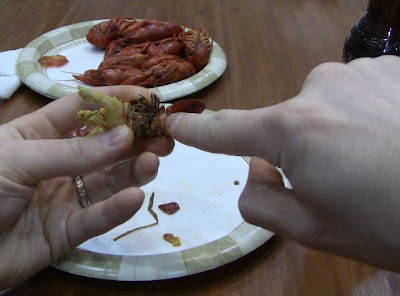 You can then flip the tail over, use your thumb to pinch the tail at the base, and then pull out the meat.

Last, but not least, you can suck the head.  The reason to do this is that most of the fat is in this part of the crawfish and it doesn’t always come out with the tail meat.  Like crabs, crawfish fat is extremely tasty and it holds a remarkable amount of flavor. You also get a good taste of the spicy boil from sucking the head.

See you Saturday!
Posted by Douglas A. Green at 10:00 AM No comments: