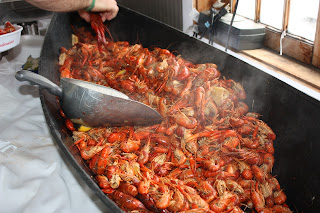 Whoa!  This year the crawfish boil was wild.  I had an absolutely amazing time and I'm sure everyone else did as well.


The weather was perfect as usual; mild and sunny with clear blue skies and just enough breeze off of the water.  We couldn't have asked for a better day.


DJ Davis rocked the house and Tuba Skinny was amazing as always.  We got some great recordings, and we are working on the CD now.  Rob says that the CD is almost finished, and we'll have copies out to all of our friends as soon as they are available.  Robin, Tuba Skinny's washboard player, was unavailable that day (much to Doug's chagrin).  But Erica brought in some new band members, including the clarinetist who added an excellent dimension to their sound.


We got a few visitors from out of town this year, but not as many as we'd like to see next year!  The DGA Family and Friends Crawfish Boil has grown every single year, and we would like it to be even bigger next year.


Doug's friend David Pritchard came in from San Antonio with his wife and they had an excellent time at the boil.  David usually has an excellent time wherever he goes, which is one reason why we insisted that he come.  He had demurred for the past four years, but now I think he'll be a DGA boil regular.


Of course all of our local friends came and brought their families along.  The private room at Friends was on the verge of being packed, but only just.  There's still plenty of room up there for an even bigger party next year!

My son Ieuan spent his time at the boil running around being cute, although I'm biased of course.  I think he was just old enough to know that he should strike a pose when he saw the camera.

So enjoy your CDs when you get them, but remember that listening to the CD is not nearly as fun as actually being there.  Although it has to be said that Doug is re-recording his welcoming address for the CD.  It was a little rough live, but he arrived early and the Andygator was flowing freely.
Posted by Douglas A. Green at 1:55 PM No comments: