Chicago is the third biggest city in the United States. As luck would have it, we recently spent quite a bit of time there. As a result, we were able to take in some of the best—restaurants, events, and attractions—that the Second City has to offer. For example, we learned that the phrase “Second City” does not mean that Chicago is inferior to New York. Rather it is the name that the city adopted following the Great Chicago Fire of 1871 that destroyed much of the city. A new, “Second City” arose from the ashes.

Like all the of major cities of the United States, Chicago arose due to its proximity to water. Located on the shore of Lake Michigan and a short distance from the Mississippi River watershed, Chicago served as a crucial function in the early 19thcentury of linking the disparate regions of the United States together. In the late 19thcentury, the nation’s booming railroad industry caused Chicago to rise to even greater prominence. The Second City served as a crucial link for east-west and north-south railroad lines.  Chicago soon became a leading center for art, education, food, and commerce.  With all this in mind, let’s start with some of Chicago’s biggest cultural attractions.

Art Institute of Chicago: The Art Institute is one of the oldest and largest art museums in the United States. It hosts over 1.5 million visitors annually. The Art Institute has over 300,000 works of art in its collection. The collection includes exhibits in African, Indian, Ancient and Byzantine, European, and Modern and Contemporary Art. It has particularly strong collections of Impressionists and modern American art. Some of the standouts include Georges Seurat’s A Sunday Afternoon on the Isle of La Grande Jatte, Pablo Picasso’s The Old Guitarist, Edward Hopper’s Nighthawks, and Grant Wood’s American Gothic.

Field Museum: Sue the T-Rex is the star attraction of the Field Museum. Sue is the best-preserved and most complete T-Rex fossil ever found. Sue is 40 feet long and 67 million years old. The Museum’s permanent exhibitions include the Animal Halls that feature a variety of mammals from Asia and Africa including the infamous man-eating Lions of Tsavo.  The Evolving Planet exhibit examines the evolution of life on Earth over our 4 billion year history. The Museum also has an exhibit on life in Ancient Egypt complete with 23 human mummies, mummified animals, and a three story replica tomb.

Adler Planetarium: Located right next to the Field Museum, the Adler sits on the shore of Lake Michigan. The Adler features the Doane Observatory with its 20 inch diameter aperture telescope that gathers 500 times more light than the human eye. This allows visitors to view objects like the Moon, planets, stars, and distant galaxies that are light years away with remarkable clarity. The Planetarium also hosts an exhibit detailing mankind’s exploration of Mars with a replica Martian rover.

Shedd Aquarium: Located right near the Field and Adler, the Shedd Aquarium is one of the largest aquariums in the United States. It houses over 1,500 species and 32,000 animals. It is the most visited aquarium in the United States and the most popular tourist attraction in Chicago. The Caribbean Reef exhibit is home to a rescued green sea turtle named Nickel. Nickel was struck by the propellers of a motorboat in 1998 that left her paralyzed from the waist down. As a result, her backside sticks up when she swims. She earned her name after an x-ray revealed a 1975 nickel lodged in her throat. She is one of many rescued animals to find a new life at the Shedd.

Museum of Science and Industry: Located in the Hyde Park neighborhood, near the University of Chicago, the Museum of Science and Industry opened in 1933 in the building that hosted the 1893 World Fair. Over the years, the museum’s holdings have grown significantly. It currently houses a full-size replica coal mine, a large model railroad, the command module of Apollo 8 (the first Apollo spacecraft to orbit the moon), and German U-Boat 505, captured during World War 2.

Lincoln Park Zoo:  Founded in 1868, the Lincoln Park Zoo is one of the oldest zoos in the United States. It is one of the few zoos in the United States that does not charge admission. The zoo houses over 1,100 animals including polar bears, penguins, gorillas, reptiles, and monkeys. The Zoo is currently constructing a new penguin and polar bear exhibit that will allow the polar bears to roam more freely. The Zoo also houses an extensive collection of African apes in an expansive habitat. The Kolver Lion House contains a number of rare African lions, leopards, linx, and pumas.


Next week, we’ll be back to look at some entertainment options in Chicago.
Posted by Douglas A. Green at 10:00 AM No comments:

In June 2015, chef Nina Compton opened Compére Lapin on Tchoupitoulas Street in New Orleans’ Central Business District.  In May 2013, Compton had competed on Top Chef: New Orleans eventually finishing as runner-up and fan favorite. A native of the Caribbean island of St. Lucia where her father served as prime minister, Compton had worked in French and Italian kitchens before heading to Top Chef. On the show, Compton dazzled the judges with her handmade pastas and ability to balance complex flavors. This ability to blend French, Italian, and Caribbean traditions carries over to the menu at Compére Lapin (“Brother Rabbit” named after Brer Rabbit of folklore).

Since the restaurant’s opening, Compton has a received a slew of recognition and awards. In 2016, New Orleans restaurant critic Brett Anderson named Compére Lapin, the New Orleans Restaurant of the Year.  Anderson explained that the biggest triumph of the restaurant was that Compton and her husband-partner, Larry Miller, “could have leveraged her television success on "Top Chef'' with a publicity stunt disguised as a restaurant and probably made some easy money — but didn't.” Instead they created a restaurant that “clearly means something to them and that has grown stronger with each passing month since its mid-2015 opening.”  In an earlier review, Anderson had awarded Compére Lapin four beans—the Times-Picayune’s highest rating.  The appeal of the restaurant, Anderson argued, was that “Every meal at the restaurant over the past six months has brought a creation that, at the time of its consumption, has had the effect of overshadowing something extraordinary that came before.”

Compton and Compére Lapin have received plenty of national press as well. Food & Wine Magazine named Compton one of the Best New Chefs of 2017. In 2018, Compton won the James Beard Award for Best Chef: South. In 2017, Eater critic Bill Addison placed Compére Lapin on its list of 38 Essential Restaurants in America.

Recently, we had the pleasure of eating at Compére Lapin, so let’s take a walk through some of the dishes we enjoyed. 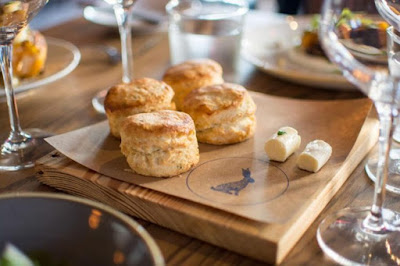 The meal began with chive-buttermilk biscuits, served with a honey butter and a bacon butter. This oven-fresh pockets of deliciousness were a strong start to the meal. 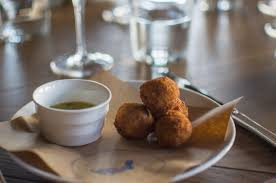 The dirty rice arancini were a wonderful blending of New Orleans and Italian traditions.

The broiled shrimp were a play on the classic New Orleans barbecued shrimp, but with a chili butter straight from the Caribbean. 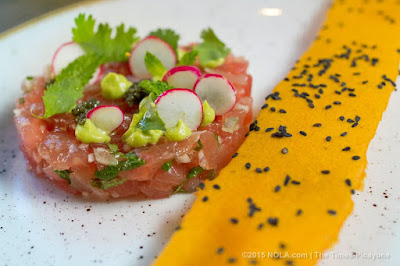 A tuna tartare served with crispy banana chips is a play on textures with the right amount of heat. All of Compton’s food is wonderfully balanced—each dish has just enough spice, leaving a little burn in the back of the throat. 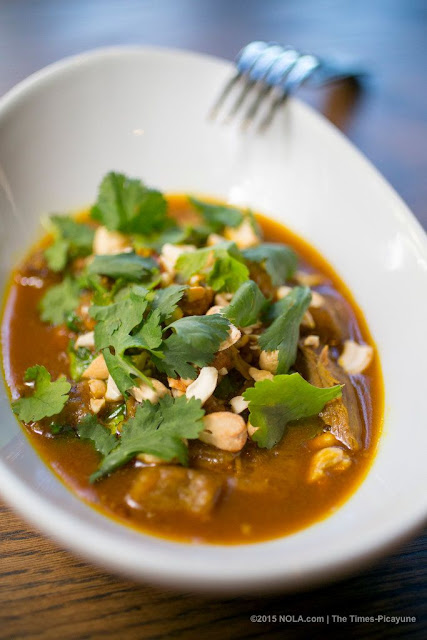 The curried goat is the absolute star of the meal.  Tenderly braised goat served with heavenly sweet potato gnocchi and cashews. This dish epitomizes Compton’s style blending New Orleans, Italy, and the Caribbean in a mouthwatering combination. It’s the type of food that creates lasting food memories and a desire to revisit them again and again.
Posted by Douglas A. Green at 10:00 AM No comments: