The Mississippi River has been above flood stage for four months. Continuous rain in the Midwest has sent torrents of water down the Mississippi towards the Gulf of Mexico. With no let-up on the way and the increasing threat of the Mississippi overflowing its banks at Baton Rouge and New Orleans, the Army Corps of Engineers is preparing to open the Morganza Spillway to alleviate the problem. The opening of the Spillway will divert the excess water into the Atchafalaya Basin, relieving the flood threat. It will also destroy wildlife, ruin crops, and devastate the crawfish, oyster, and other aquatic life.

In 1927, heavy rainfall that began the previous year swelled the banks of the Mississippi causing the river to overflow its banks. The resulting flood left 700,000 people homeless and put over 27,000 square miles of land under water. In a desperate attempt to save the city of New Orleans, city and government authorities blew up the levee 13 miles south of the city at Caernarvon. By blowing up the levee, they hoped to divert the floodwaters into the lowlands south of the city. Ultimately, however, the detonation was unnecessary. Other levees had already broken upstream that lessened the flow of water towards the city.

The following year, Congress passed the Flood Control Act of 1928 to try and prevent future disasters. The law authorized the Army Corps of Engineers to design a system of levees and spillways to divert water away from populated areas during floods, but also keep the Mississippi on its current course through Baton Rouge and New Orleans before reaching the Gulf of Mexico. The Corps of Engineers eventually constructed multiple spillways along the Mississippi River including the Bonnet Carre Spillway outside of New Orleans that directs floodwaters into Lake Pontchartrain. Work on the Morganza Spillway’s levees began in the late 1930s, but was not completed until 1954.

The land around the Morganza is well above the normal river level, so for most of the year, the land is dry. Water only reaches the Spillway when the Mississippi rises above flood stage. When the water level is normal, the Old River Control Structure (ORCS) and Old River Control Auxiliary Structure (ORCAS) control the flow of water before it ever reaches the Morganza. ORCS and ORCAS divert excess water from the Mississippi River into the adjacent Atchafalaya River. By sending about 70% of the water to the Mississippi and 30% to the Atchafalaya, ORCS and ORCAS have kept the Mississippi River on its current path. If left to its own devices, the river would have shifted to the west down the Atchafalaya, which is now the shortest distance to the Gulf.

As a result, the Morganza has only been opened twice in its history—in 1973 and 2011—and the Corps has never opened all 125 gates. In 1973, they opened 42 and in 2011 only 21. Considering the large amount of water being diverted, the Corps prefers to release the water gradually.

The opening of the Morganza will cause immense damage to the Atchafalaya basin, which is filled with a diverse range of wildlife, farms, and seafood. Over the years, people—especially the poor—have taken to living in the basin because they cannot afford to live elsewhere. The water will damage their homes and livelihoods. The influx of water will also drive animals of all kinds—deer, bears, turkeys, hogs, rabbits—from their homes, forcing them to seek higher ground that could include roads and residents’ homes. With a lack of available high ground, most will die. The water will also be devastating to fisheries the influx of warm fresh water will kill crawfish and oysters, which thrive in salty, cold water. This river water, which has largely been accumulating near the Spillway, is stagnant and will kill fish or other aquatic life. Birds may be better off, but ground birds and birds in the midst of nesting will likely drown.

All of this will be the result of nearly a hundred years of flood control where the Corps of Engineers decided to try and assert its authority over the Mississippi River itself.
Posted by Douglas A. Green at 10:00 AM No comments: 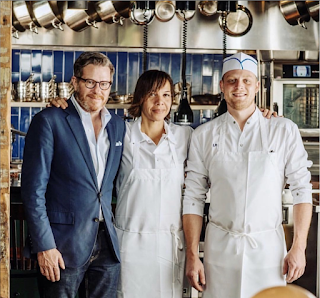 Last year, we reviewed Compere Lapin, a restaurant blending New Orleans, Italian, and Caribbean influences. The restaurant, the brain-child of chef Nina Compton, a competitor on Top Chef: New Orleans, has become one of the most beloved restaurants in the city. Compton and her team have won a slew of local and national awards. Food & Wine Magazine named Compton one of the Best New Chefs of 2017. Eater critic Bill Addison placed Compére Lapin on his list of 38 Essential Restaurants in America. In 2018, Compton won the James Beard Award for Best Chef: South. New Orleans restaurant critic Brett Anderson awarded Compére Lapin four beans—the Times-Picayune’s highest rating.  The appeal of the restaurant, Anderson argued, was that “Every meal at the restaurant over the past six months has brought a creation that, at the time of its consumption, has had the effect of overshadowing something extraordinary that came before.”

In 2018, Compton and husband Larry Miller opened Bywater American Bistro, their much anticipated follow-up to Compere Lapin. The two restaurants differ in significant ways. Bywater American Bistro is located in the Bywater, a formerly working class neighborhood undergoing an artistic and culinary evolution. Bywater is very much a neighborhood restaurant. The simplicity of the name revealing its purpose. The menu features a section devoted to grains as a tribute to the restaurant’s building, formerly the largest rice mill in the country. Now the Rice Mill Lofts house Bywater and residential condos. Compton and Miller live in one of the condos above the restaurant.

While Miller manages Compere Lapin and Bywater American Bistro, Levi Raines helms the kitchen at Bywater. A former sous chef at Compere Lapin, Raines oversees the small open-air kitchen with ease. At a recent dinner, Raines, recently named a 2019 Young Gun by Eater, glided seamlessly between plating, tasting, and expediting, all within several feet of the restaurant’s bartenders, who serve the customers seated at the bar. At any given moment, Raines is six or so feet away from customers, while the restaurant hums around him.

Like Compere Lapin, Bywater American Bistro’s food shines with well-executed food inspired by a sense of place. Let’s take a look at some of the dishes we tried. 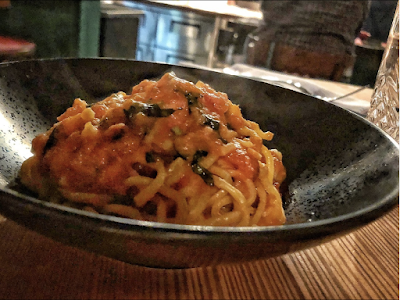 The spaghetti pomodoro combines the comfort of spaghetti at home with the precision of one of the nation’s most skilled chefs. The noodles are silk-like in the texture, and the surrounding sauce is combines buttery richness and a delicate balance of sweet and acid. 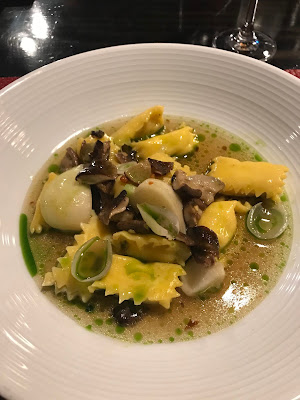 The ricotta agnolotti is a pasta-lover’s heaven. The ricotta burst with flavor out of the delicate pasta wrapper. Swimming a rich and flavorful sauce, we would have been happy to just eat a giant plate of it. 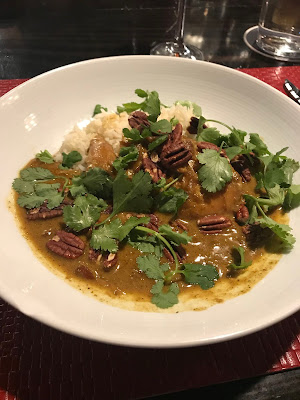 The rabbit curry, served with jasmine rice and pecans, rivals the flavor found in Compere Lapin’s curried goat. The bold flavors of the curry match up well with the tenderly cooked rabbit. The pecans provide crunch and substitute for cashews or other nuts found in curries. 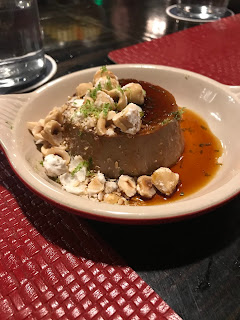 The spiced Nutella flan is a delightful and surprising dessert. Light and bright, the flan is a wonderful compliment to the rest of the menu. Filling, but not overwhelming, the flan leaves diners with one last bold hit of flavor in a menu full of them.
Posted by Douglas A. Green at 10:00 AM No comments:

Accents. Everyone has one. Our accents are shaped by where we were born, our education level, our class, our race, and a myriad of other factors. Across the United States, different regions have different accents. Try asking for "wah-tah" in Boston or "wooder" in Philadelphia and you'll see the difference.

Then there's the ubiquitous "southern" accent with its slow pace, glideless vowels, and emphasis on pronouncing "r"s, amongst other linguistic evolutions. Accents are both a point of regional pride and a nearly inexhaustible source of humor. Some of it funny, most of it trite.

When it comes to New Orleans, the city has an accent all its own. Centuries of immigration andclass and racial divisions have made the city's accent unique--not just in the United States, but in the South and even within Louisiana itself.

Want to learn more about the New Orleans accent? The good people at Very Local NOLA have put together a handy little guide. Enjoy!