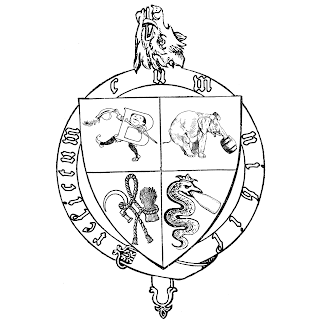 
As a lover of beer, naturally I have always thought about trying to brew it myself.  The art of brewing is ancient and subtle, but I figured if it could be done thousands of years ago, I should be able to manage it, especially with the wide range of modern home brewing conveniences.  Nevertheless, home brewing was always little more than a passing thought, until I saw a Groupon for a beer brewing kit.  This was surely a sign.  The only thing I like more than beer is a bargain, so I snapped it up!

Now, the kit did not include a pot to brew the beer in, so it wound up languishing in my closet while I fretted over having to buy a pot…retail.  But the beer would not be denied!  On a lark, I went to a silent auction with a friend (note: lark = free food and alcohol), and to my surprise there I found a pot that would suit my home brewing setup perfectly.  But could it be had for the right price?  In an attempt to test providence, I placed a meager $50 bid.  Winning the auction was surely a second sign.  I must lead my hops to the promised land! 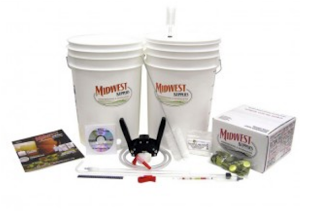 But was I really going to embark on this quest?  Looking at all of the equipment arrayed before me I began to have doubts.  Was I, William Bradley, truly destined to brew?  Sure, they did it thousands of years ago, but they knew what they were doing.  They had to do it to survive.  Who was I but some lowly paralegal drunk on hubris?  It was then, in the depths of my doubt, that I heard a voice.  “If you can boil water, you can brew beer.  You can boil water can’t you, numbskull?”  My third sign.


Onto the stove the pot went!  Into the pot went water, and into the water went the grains.  The brewing had begun!  As I watched the temperature of the water rise, I was afraid that the stove would not produce enough heat to steep the grains, but the grains turned to wort and the extract was ready to be inserted. After cooling the beer I transferred it to the fermentation bucket.  With this first batch I only had one fermentation stage and required three weeks of fermentation.  Now came the first challenge.  Having failed to plan very well, I wound up being out of town the last week of fermentation…  I solved this little problem with the creative solution of letting the beer ferment an additional week.  Mad brewing genius?  Yes, I think so.  Not wishing to make the same mistake twice, after I siphoned off the beer I went to my calendar and marked one month from the bottling date as “beer drinking day.” 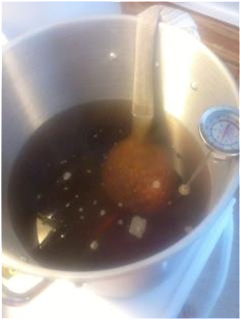 One month later I was facing the first bottle of…whatever I had made.  Would it taste okay?  Would it be edible?  Would it even be beer?  Yes, yes, and yes!  I had done it!  I was now a Brewer!  The beer, an Irish stout, came out a little darker than I expected, but it was definitely beer and definitely very tasty. I did not measure the alcohol content but let’s just say that I was feeling pretty good after enjoying a few bottles, to get the sense of it, of course.


So, now that I am officially a home brewer, look forward to further accounts of my (mis)adventures in the topsy turvey home brewing.  One day you can look back and say, I knew him when… 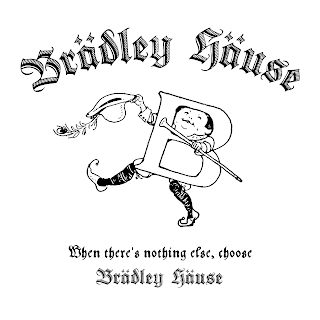 We have been encouraging Bill to make a label for his home brew beer.
Thus far, Bill has been reluctant to formally adopt Bradley Hause

Posted by Douglas A. Green at 6:00 AM No comments: 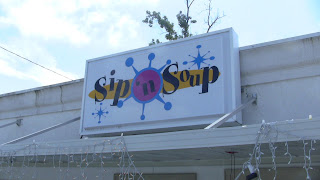 I thought I would start off our NOLA Snowball experience close to home with a new snowball stand called Sip n Soup on the Northshore of Lake Pontchartrain.

But before we get into the actual snowball stands, I want to cover the 3 snowball commandments.  Violating any of these is a cardinal and unforgivable snowball sin.

1: Thou ice shalt not be crunchy.

A bit of "bite" to the ice is acceptable, but crunchy ice is a no-no.  Snowballs are not snowcones, and chunky, crunchy ice belongs in a snowcone.

2: Thou shalt not leave unflavored ice.

The snowball syrup should permeate the entire snowball.  One should never run into any unflavored ice in a properly constructed snowball.  It either means the stand has been stingy with the syrup or the ice is packed too hard.  Nothing is worse than finding a dense clod of flavorless ice in the middle of your snowball.

3: Thou syrup shalt always be flavorful.

Flavorful syrup is essential.  Now, not all snowball flavors are intensely sweet, but the flavor, whatever it may be, should always be strong.  Thin, watery flavor denotes watered down syrup, and if you are cutting corners on a cup of ice and sugar water, you need to find a new line of business.

Sadly, the Abita snowball stand right down my street is an unrepentant sinner and is to be avoided on general principle.  Luckily, there are many quality snowball stands in the area.

Sip n Soup is a new snowball stand that I visited for the first time at the end of last week.  I had been avoiding Sip n Soup due to the emotional trauma of the stand having previously been Yummies Snowballs, the very best snowball stand in the GNO.


Yummies was simply the best.  Yummies had the longest operational season of any stand on the Northshore, firing up its shaving machine as soon as the birds began to chirp and hanging on well into October until the average daily temperature dropped below 65 degrees.  If it was sunny and pleasant, Yummies would be open, and producing the best, most consistent snowballs in the GNO.

Sadly, for reasons that remain a mystery, Yummies closed its doors last season and did not reopen.  A new stand took over the space with the odd moniker "Sip n Soup," because they proffer soups and sandwiches in addition to snowballs (don't ask my why).

Sip n Soup is on the corner of US 59 and US 190 on the Northshore of Lake Pontchartrain, in Mandeville, Louisiana.  It is right next to a Friendly Video and is consequently hard to miss.  It is a permanent location at the end of a little strip of offices, but like all snowball stands it is only open seasonally.

Sip n Soup has a small outdoor seating area with a few benches, and parking is spacious (another reason Yummies was awesome).  The selection of flavors is respectable, with classics like Strawberry, Tiger's Blood, Bubble Gum (only one color), and Cake Batter.  Sip n Soup additionally maintains a few oddballs such as Orchid Cream Vanilla and Turtle Pecan, and offers condensed milk as a topping.  Sip n Soup also stuffs, but with frozen yogurt instead of soft serve ice cream, and makes any flavor a cream flavor. 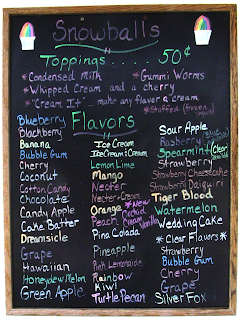 All in all, pretty standard and nothing terribly exciting.  The flavor selection is on the minimal end, but perfectly adequate.  The owner said that her family also operates a stand on the Southshore, so presumably they know what they are doing.

All told we ordered 5 snowballs.  My son Ieuan demanded Rasberry, my wife Liz got Nectar, and I got a couple of my favorites to make sure to get a good quality comparison (Bubble Gum and Dreamsicle) and a Sour Apple.

Sip n Soup makes an adequate snowball.  5 out of 5 snowballs avoided any cardinal sins, the flavors were acceptable, syrup sufficient, and very generous with the condensed milk, which Liz greatly appreciated (most stands - even Yummies - never put on enough condensed milk to satisfy my wife).

Now, I am biased because Sip n Soup took over the Yummies location, but there were a few issues with our snowballs.  First, the ice melted far too quickly.  It wasn't a particularly hot day (for New Orleans in July), but those snowballs nonetheless collapsed into liquidy slush very rapidly.  Normally, you want a melt rate that allows you to sip and eat, but with these you had to sip almost constantly just to keep the snowball dry enough to use your spoon.

Second, the flavors were very...artificial.  Now, snowball flavors are super artificial to the point that it is like complaining a Jolly Rancher tastes fake, but nevertheless, the flavors were weird across the board.  You want a bit of an artificial taste in a Bubble Gum snowball, by which I mean that sort of tangy, processed note you get in a piece of Bazooka Joe or Double Bubble, but you don't really want that in your Raspberry or Nectar flavors.  I suspect that the syrup was based off of a cheap concentrate sourced from somewhere other than Snow Wizard (which supplies the majority of stands in the GNO).

Finally, the prices were a little stiff when it comes to snowballs.  Snowballs are dirt cheap, which is part of what makes them fabulous, so I can't really complain.  I couldn't really care less if my snowballs totaled up to 8 dollars or 10, and I usually leave a generous tip in any case.  However, for the sake of completeness I will note here that the prices were about 25 cents above market norm.

Sip n Soup is an acceptable stand.  If you go there you won't get a "bad" snowball, but there are better stands out there, such as Papa Sam's which we will be visiting next week.  It is sad that Yummies is gone, and Sip n Soup does not fill the gap left by Yummies, both in the GNO snowball market, and my heart.