Last week, we started our review of the New Orleans Saints offseason by looking at the trade of wide receiver Brandin Cooks to the New England Patriots for draft picks. This week, let’s take a look at the Saints free agent activity.

For the first time in years, the Saints had nearly twenty million dollars in cap space thanks to a rising salary cap and a Drew Brees contract extension that has him counting $18 million against the cap next year regardless of whether he’s on the roster. Flush with cash, the Saints spent it like a tourist at Mardi Gras, stumbling into one good deal and three bad ones.

Signed G Larry Warford to a four-year contract worth $34 million with $17 million in guarantees.

This is the most sensible free agent contract that the Saints have handed out in some time. Warford is young (25) and has been the starting right tackle for the Detroit Lions the past four seasons. Warford, a 2013 third round pick, replaces the aging Jahri Evans who played competently last year, but is well past his prime. While $17 million may seem like a lot of money for a guard, the Saints rely on their interior linemen more than most other teams. Because Drew Brees is so short, he relies on his center and guards to keep the space in front of him clear so he can see downfield. The presence of Warford alongside Max Unger, Terron Armstead, and Andrus Peat should keep the pressure off Brees and allow him to carve up opposing defenses.

Signed DT Nick Fairley to a four-year contract worth $28 million with $14 million in guarantees.

Fairley, a former first round pick (13th pick overall), played four largely disappointing seasons in Detroit. He followed that with another subpar season with the Rams. Last season, New Orleans signed Fairley to a low-risk one-year, $1.4 contract, hoping that Fairley might finally play up to his potential. They were rewarded with 6.5 sacks and the first complete season of Fairley’s career. Rather than moving on, however, the Saints decided to overpay for Fairley’s one good season by signing him to a four-year extension. Now Fairley will have to replicate the one good season of his career (out of six) in order to justify his contract. In other words, the Saints invested significant cap space into a veteran coming off a career year just like they did with the recently released Jairus Byrd—how’d that work out?

Signed LB A.J. Klein to a four-year contract worth $24 million with $9.4 million in guarantees.

While the Saints are certainly in need of help at the linebacker position, who were they competing with to pay a backup linebacker starter money? Were other teams lining up to pay nearly ten million in guarantees to a guy who started six and seven games over the past two seasons? Like the Fairley deal, New Orleans continually refuses to learn from their past. They try to spend their way to defense competency and burden their salary cap with overpaid, underperforming veterans. Have we already forgotten last year’s unfortunate signing of James Laurinaitis who was supposed to provide “veteran leadership” and was released halfway through the season?

Signed WR/KR Ted Ginn Jr. to a three-year contract worth $11 million with $5 million in guarantees.

We covered this a little last week, but it’s worth reiterating. Ted Ginn Jr. is not good. He’s never been good. He’s fast and that’s it. He’s never had 800 receiving yards. He’s caught double digit TD passes once (10 of them) in 2015. He’s never started 16 games in a season. His catch percentages hover in the dangerously low 50-60% range. He’s ostensibly the replacement for Brandin Cooks, except he’s older, worse, and more expensive. Great job, Mickey Loomis.


So out of the Saints biggest free agent signings, they managed to bring in a much-needed guard, paid for an outlier season from a busted draft pick, overpaid a backup linebacker, and gave $5 million in guaranteed money to a guy who can’t catch the football. 7-9 here we come again!
Posted by Douglas A. Green at 10:00 AM No comments:

After a third straight 7-9 season, the New Orleans Saints entered the NFL’s off season determined to not waste another year of Drew Brees’ (soon-to-be over) Hall of Fame career. Thanks to a rising salary cap and a delayed cap hit from Brees’ contract extension (he’ll count $18 million against the cap next year whether he’s on the roster or not), the Saints have been active in free agency and the trade market. Next week, we’ll take a look at their free agent signings. But for this week, I wanted to focus on their biggest move of the offseason: the trade of wide receiver Brandin Cooks to the New England Patriots.

The logic behind the Saints getting rid of Cooks is convoluted. There were rumblings of the Cooks being dissatisfied with his role on the team last season. Despite this apparent unhappiness, he caught 78 receptions for 1,173 yards and 8 touchdown passes. New Orleans also wants to improve its defense and thinks weakening the offense is the way to go. Coach Sean Payton explained in an interview that “As we're trying to improve on defense, you look at every avenue that might give you that chance.” Additionally, the Saints felt pressured to move quickly since they owed Cooks a nearly $800,000 roster bonus that the Patriots are now responsible for paying. So the Saints felt they needed to trade Cooks because they need to improve the defense, Cooks was apparently unhappy but productive, and they didn’t want to pay him a roster bonus? These moves suggest that they’re cheap (and/or have no money).


They also show that New Orleans doesn’t understand how to value players properly. Cooks is 23 (he’ll turn 24 in September) and has two years left on his contract. The first year is worth only $1.5 million and the second is a 5th year option worth $8.5 million. Not bad for a guy who has had 1,138 and 1,1173 receiving yards over the past two seasons to go along with 17 TD receptions. To replace Cooks, the Saints signed Ted Ginn Jr., a wide receiver known for being speedy and not being able to catch the ball at all. He is 31 (eight years older) and signed to a 3 year, $11 million contract. Ginn has never had a thousand-yard season. He’s never had a nine hundred-yard season. He’s never even had an eight hundred-yard season. So which would you rather have—Cooks, a talented wide receiver on the rise? Or Ginn, for less money per season, but markedly less production?

There’s also the draft pick compensation to consider. The Saints received #32 and #103 picks and had to send away #118. According to Chase Stuart’s draft value chart, the difference between the picks is worth 13.4 AV (approximate value, an inclusive measure of how much a player is worth) or the equivalent of the 28th pick in the draft. Cooks, over the past two seasons, has been worth 20 AV and that’s a fair barometer for him going forward as well (barring injury). So, the value of the draft picks New Orleans has acquired doesn’t even add up to Cooks’ production. So the choice is Cooks versus Ginn and the 28th pick. If you’re trying to win now, you take the talented young receiver on the rise and devote the resources you used on signing Ginn to helping the defense.

Now, that may not be the end of the Saints wheeling and dealing with the Patriots. New Orleans hosted restricted free agent and New England cornerback Malcolm Butler for a visit last week. (Restricted free agency means that the Patriots have the right to match any offer to Butler or let him leave and receive the signing team’s first round pick in return.) Butler, the hero of Super Bowl XLIX, has not signed his one year, $3.91 million offer with the Patriots (meaning he can’t be traded yet). Now the Saints are unlikely to simply sign Butler to a contract and surrender their first rounder (11th overall) to the Patriots. A more likely scenario would be the Saints and Butler working out a contract extension (requiring significant financial resources that the Saints apparently don’t have, since they just traded Cooks to avoid paying him eight hundred grand) and then sending the 32nd pick overall back to New England.

The Revised Trade: Brandin Cooks & the 118th pick to the Patriots for Malcolm Butler & the 103rd pick

In this scenario, the Saints move up 15 spots in the draft and get one guaranteed year of Malcolm Butler while the Patriots move down 15 spots (the equivalent of a sixth-round pick) and pick up two guaranteed years of Brandin Cooks.


While the Saints claim they’re trying to win now, they’ll have paid a premium to send their star wide receiver out of town with two years remaining on his contract in exchange for the equivalent of a late first round pick. Or they’ll have paid an even higher premium to move up 15 spots in the draft and get one year of Malcolm Butler and in exchange for two of Brandin Cooks and a sixth-round pick. Either way, it’s hard to see how the Saints are better off than they were a month ago.
Posted by Douglas A. Green at 10:00 AM No comments:

The 10th Annual DGA Family and Friends Crawfish Boil featured lots of crawfish, a juggler, a guy who nailed things to his face, a legendary blues artist, a steampunk inspired band, and the world premiere of Doug’s very own theme song by the Mighty Pelicans. In other words, it was a hell of a party. And if you missed out this year, don't worry next year will be even better.

The theme this year was “God Bless the Bottom Feeders” in honor of the crawfish, oysters, shrimp, catfish, and other seafood that were once derided as unfit for human consumption, but in fact play a key role in our culture and cuisine. 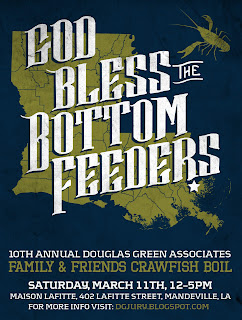 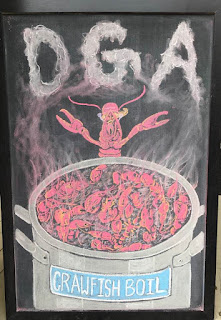 As usual, we had a lot of crawfish and ate just about all of them. 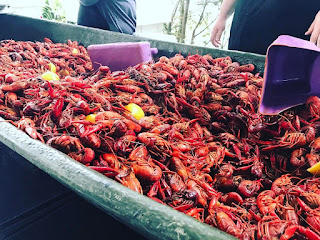 The Mighty Pelicans in action with a happy Elliot dancing in front. 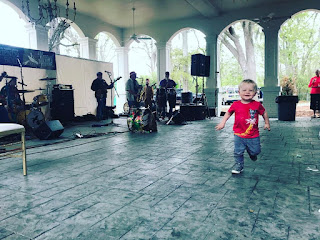 This year’s boil featured the world premiere of Doug’s theme song written by the Mighty Pelicans! 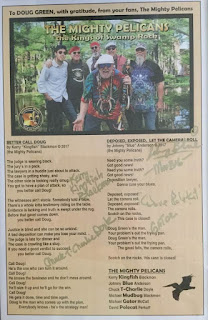 In the coming weeks, we’ll feature some more photos and videos from the boil, but in the meantime, thanks to everyone who came and made this year’s boil truly something special. We can’t wait to see you all again next year!
Posted by Douglas A. Green at 10:00 AM No comments: