Boil Was a Blast!

The 4th annual DGA family and friends crawfish boil was a complete success!  The weather was perfect, food was fantastic as usual, Tuba Skinny played their hearts out, and everyone had an awesome time.

We couldn't have asked for a better day for the boil.  The weather was a little dicey during carnival and several parades even got rained out.  Liz and I were in the quarter on Fat Tuesday and the sky was threatening to drench us all day, but by the time the weekend rolled around the front had passed and the weather was remarkable.  The sun shined all day and there was just the right amount of breeze coming up from the lake.  You really have to have been there to fully appreciate it.

This year the crawfish boil was bigger and better than ever.  The whole DGA team and their families were there as usual, but we had some special guests from out of town this year. 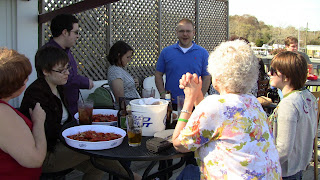 Greg and Lori Teran came down from Boston a few days early and had a great time exploring New Orleans. They even went biking in the 9th ward, which is more adventurous than I've ever been.

Liz's family drove all the way down from Indiana so stay with us over Mardi Gras and come to the boil.  They visited wineries on the north shore, toured the Abita Brewery, saw the sights in New Orleans, and Liz's sister even went down with us to the French Quarter for Fat Tuesday! 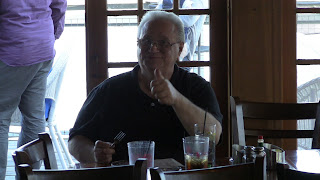 Michael, Rob, Gene, and Mark from Sights and Sounds came as well, and they did a fantastic job recording the show for us, even while stuffing their faces with crawfish. 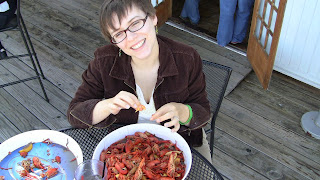 All of our visitors from out of town were peeling crawfish like pros in no time.  And speaking of crawfish, we had more this year than any year before.  All told we went through almost 300 pounds.  We ordered so may that Tim from Friends Coastal Restaurant was worried that he wouldn't be able to buy enough fresh mudbugs.

As predicted, Abita Andygator was also a big hit at the boil.  Doug swears that we went through 8 pitchers of ol' Andy alone, to say nothing to the vast quantities of Strawberry Ale consumed in the name of good food and good friends. 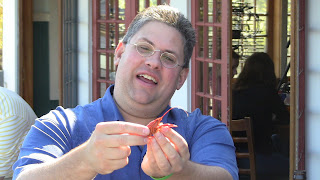 Mary also brought a special treat of absolutely amazing gourmet cupcakes from a local bakery called Baby Cakes.  These fiendish little delights are indescribably good.  I've got a good picture of Liz enjoying a "few" babycakes, but I promised that I wouldn't post them...at least not today. 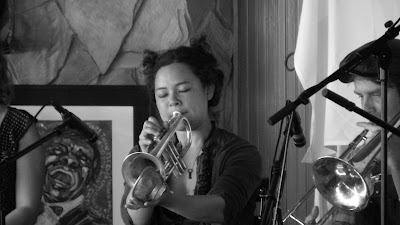 Tuba Skinny put on an incredible show.  Erika's vocals were phenomenal and Rob captured the sound perfectly.  I sneaked a listen to the unmixed recording and even that blew me away.  I can't wait for Rob to polish it all up in the studio for our live CD.


Doug managed to introduce the band with a little panache, thanks to some help from Robin.  He also reminded all of us why we love Louisiana so much.  As Doug said at the boil, we could do this job from anywhere in the country, but we chose to do it in New Orleans because we love it here.  Everything that this place means to us is wrapped up in these crawfish boils, and we're proud and privileged to be able to share that with our friends and family.

Posted by Douglas A. Green at 8:47 PM No comments: