Traveling to New Orleans is difficult right now. The city has lots to offer visitors besides the French Quarter and Bourbon Street. We've outlined the history of City Park in the past, but since you likely won't be visiting City Park anytime soon, how about a video tour instead?

For years, Doug has maintained an extensive bonsai collection. In the past few years, he has taken that passion for bonsai and opened a bonsai nursery, selling trees and sharing his expertise with the general public.

Underhill Bonsai engages in educational programs on the third Thursday of every month for the public, that in light of the pandemic, have moved completely online. For those new to the world of bonsai, we have one of those videos for you all to enjoy.

A few weeks ago, we offered some pandemic TV recommendations--well the pandemic is still raging and we still have plenty of time to watch TV, so here are a few more TV shows that could be worth your time.

The Great (Hulu): Elle Fanning plays Catherine the Great, Russia's longest ruling in monarch, in this TV series that is very loosely based on Catherine's real life. In the show, a naive Catherine arrives in Russia full of inspiration and a desire to transform her new homeland into a progressive European power. Instead she meets her boorish fiancé, Peter (Nicholas Hoult) who is as stupid as he is cruel. What follows is a dark comedy of remarkable depth and pathos. Catherine struggles with coming to terms with her new life of courtly intrigue and the capriciousness of her odious husband. Hoult revels in Peter's harebrained scheming and portrays Peter as both a monster and a pathetic man-boy seeking his dead mother's approval. (He keeps her in a glass case in the hallway just so he can talk to her.) Surrounding Catherine are a sassy servant, a secretly idealistic courtier, a beaten-down general, and an aristocratic couple trying to keep their marriage intact as Peter carries on an affair with the wife.

Battlestar Galactica (Peacock): Ronald Moore's reimagining of the campy 1970s Star Wars-knockoff premiered in 2003 as America was in the midst of navigating our post 9-11 world. The series, set after near destruction of humanity, followed a small band of survivors on the edge of the galaxy trying to avoid death from their enemies and to rebuild humanity. With towering performances from Edward James Olmos and Mary McDonnell, BSG tackled the issues at the core of humanity's never-ending search for purpose. Episodes dealt with the morality of suicide-bombing, abortion, justice, forgiveness, the emptiness of revenge, and dealing with trauma. In four seasons, BSG pushed the boundaries of science fiction to fascinating and morally ambiguous ends, but never lost of sight of the humanity of its characters.

The Good Place (Netflix): This show, from Michael Schur (co-creator of Parks and Recreation), takes a rather high concept premise and runs with it. Kristin Bell plays a woman who is accidently sent to the “Good Place” after she dies. Only she’s not supposed to be there. Ted Danson, as a mid-level afterlife manager, reminds us why he might be the best sitcom actor ever.  Over the course of its four season, the show dealt with ethical questions about humans and what we owe one another. It also presented a murders-row of characters from "Arizona dirtbag" Eleanor to Chidi, the indecisive philosopher to Tahani, the people-pleasing, name dropping socialite, and wanna-be Jacksonville DJ Jason. The Good Place will make you laugh and cry in equal measure.

Every year we have a Bingo card filled with TV announcer cliches regarding the Saints. Well this year's edition is here, updated for COVID-19. 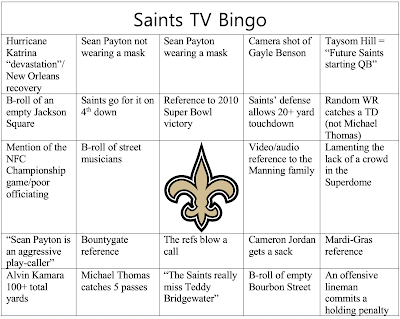