My oldest daughter and her husband moved to Austin last year in pursuit of a weird lifestyle and cool jobs.  Austin is not the only city in the U.S. that purports to keep it weird, but Austin is the most successful in my not very humble opinion.  A recent order from the notoriously candid Sam Sparks demonstrates a couple of things.  It reads in part, “Greetings and Salutations!  You are invited to a kindergarten party on Thursday September 1, 2011 at 10:00 am in Courtroom 2 of the United States Courthouse, 200 W. Eight Street, Austin, Texas.”  First, keeping Austin weird is kind like a religion.  Second, federal judges are appointed for life.  Read the order here.


This isn't the first time that Sam Sparks has worked to keep Austin weird.  He began his Barton Springs ruling with the following poem:


Barton Springs is a true Austin shrine,
A hundred years of swimming sublime.
Now the plaintiffs say swimmers must go
'Cause of "stress" to critters, 50 or so.
They want no cleaning because of these bottom feeders,
Saying it's the law from our congressional leaders.
But really nothing has changed in all these years
Despite federal laws and these plaintiffs' fears.
Both salamander and swimmer enjoy the springs that are cool.
And cleaning is necessary for both species in the pool.
The City is doing its best with full federal support,
So no temporary injunction shall issue from this Court.
Therefore, today, Austin citizens get away with a rhyme;
But, the truth is they might not be so lucky the next time.
The Endangered Species Act in its extreme makes no sense.
Only Congress can change it to make this problem past tense.
Posted by Douglas A. Green at 11:21 AM No comments:

DGA Dinning: The Cub in Shreveport

Written by Benson and Bill 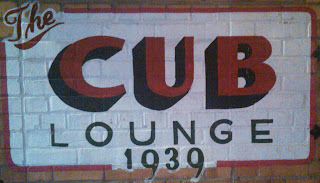 When the DGA team is on the road we're always on the lookout for a decent place to eat.  Drippy, plastic-wrapped room service get's old very quickly and no matter how well done the catering at a venue may be, it never satisfies like a well-cooked meal in a top-notch restaurant.

As many of you know, we're in Shreveport quite a bit, thanks to the seemingly never-ending stream of Ed Tex patent litigation.  It's gotten to the point where I'm sure the staff at the Shreveport Hilton has started sticking me in the same room every trip.  While Ed Tex patent litigation is great, the unfortunate thing about Shreveport, that most of our readers are likely painfully aware of, is that there are precious few decent places to eat.  It really is a serious problem.  Most of the time I find myself eating at the Hilton, which invariably means the Andouille Crusted Red Snapper since I don't trust anything else on the menu.  This preference of mine is made worse by the fact that the staff never seems to know what I'm talking about when I order.  News flash fellas: it's one of the four entrees on your menu.
In the past, venturing out of the hotel has meant a long, drawn out meal at the Superior Steakhouse, Italian and live piano music at Olive Street Bistro, or one of the chain restaurants down on Youree Dr.  All that has changed now thanks to a wonderful little hole in the wall restaurant called The Cub.

The word on the street is that The Cub is the best kept local secret in Shreveport.  Thanks to some enterprising work on the part of the Sights and Sounds crew and our own Bill Bradley we've managed to uncover this little gem of a restaurant. Everyone we talked to about The Cub praised the steaks and guaranteed us that they are the best in Shreveport.  In fact, they are so good that Matt ate at The Cub three nights in a row!
The Cub is hidden away at 3002 Girard Street right off of Youree Drive by the City Bar.  Now, it doesn't look like much from the outside.  In fact, I didn't even know it was there in spite of having driven right past it countless times.  The Cub is tucked behind some building and a run-down ratty old facade known as City Bar.  Or, if you prefer to approach from Girard, it's between the Broadmoor Garage and Advance Auto Parts.  It's almost like The Cub is trying to stay hidden, but in all fairness, it has been around since 1939.  The City Bar looks old, but in a crumbling, unkempt sort of way.  I doubt it has been blocking our view of The Cub for 60 years. 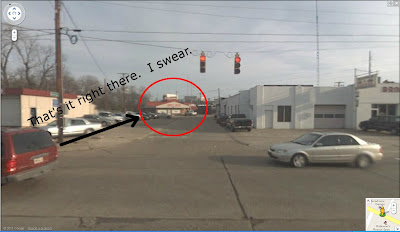 Driving down Youree, you really have to trust that The Cub exists.  It isn't visible from the street, at least not in any meaningful way.  Plus, the creepy-looking City Bar and not-so-inviting buildings obstructing your view of The Cub can be discouraging if you're not committed to getting there.  But I assure you, it is well worth making the effort to discover The Cub.

From the outside, The Cub is an odd looking establishment with boarded up windows, a patio that offers a fine view of another building, and a parking lot right next to the kind of disorganized lot of mangled cars that only a local mechanic can accrue.  But for all of this, The Cub has the kind of old-time, lived in charm that many would work hard to deliberately create.  Once you find The Cub, the place is immediately charming. 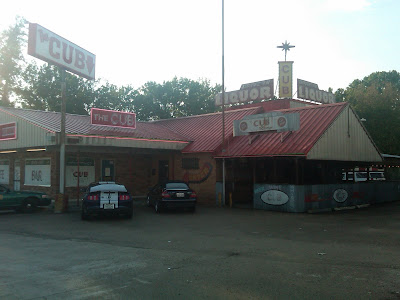 As soon as you enter The Cub, you may think that you've gone to the wrong place.  Right inside the front door is a loud, crowded, smokey little bar lit mainly by neon beer signs and the glow from a row of video poker machines.  If you're in to that sort of thing, I'm sure this part of The Cub is fantastic.  It even has a couple of pool tables in the back.  If not, don't worry.  Just head through the glass door labeled "The Cub Restaurant."  It's through a cool brick archway to your left.  Once you're inside the restaurant area, the sounds of the noisy bar melt away.
Although The Cub's menu items consist of steak, a little seafood, chicken, a few sandwiches, and a salad, the real reason to go there is the steak. The menu gives you a selection of steak sizes and cuts but it is also possible to order however large of a steak you want. Just tell the waiter/waitress how many ounces you would like and which cut: rib eye, fillet, or New York strip. The steaks are cooked simply, but wonderfully.  Seasoning is minimal, but the meat is all prime and done just right. 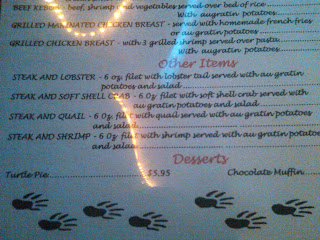 The restaurant is quiet and cozy.  Seating is close and the small dining area is lit by a line of orange rope lights along the ceiling.  The cool brick walls offer a wonderful refuge from the summer heat outside and the whole place feels as if you've stepped outside of the world for a little while.

Unfortunately, the cozy seating comes at a price: The Cub doesn't seat very many and won't be able to handle a group larger than six or seven.  The restaurant has one five top that you could probably squeeze a few more people into, two tables for four, four small booths, and a little table for two.  On the plus side, the small area and minimal seating means that the wait staff is extremely efficient.  Not only was the staff friendly each time we went, but the food was out quickly.

In terms of price, The Cub might surprise you.  The menu is short and the preparation is simple, but the ingredients are high quality.  Steaks run around 30 dollars.  The 12 oz. rib-eye and the 12 oz. New York strip are both 31 dollars.  Appetizers run around 8 dollars and the chicken options are all about 17 dollars.  The Cub also has an okay wine list with a little more than twenty offerings by the bottle.  Most of the reds are Napa Valley or Australian.  The Cub also has several offerings by the glass including Francis Coppola Cabernet and Merlot, Geode Chardonnay, Jargon Pinot Noir, and Jacob Creek Reserve Shiraz.  I stuck to beer while I was there.  The Cub does keep Abita Amber in stock.

All in all, The Cub is a fantastic place to visit whenever you're in Shreveport.  The whole DGA team thoroughly enjoyed themselves, and some of us more than once.  It is the perfect place for a small party looking for a great meal in a relaxed atmosphere.  And if you're looking for a steak, The Cub is definitely hard to beat.  I'd put it higher than both Superior Steakhouse and the Eldorado.  Dress is most definitely casual, but you also won't look out of place in a suit or dress shirt.  It seems that the locals head out to The Cub for both a relaxed meal and a nice dinner out.  This is the restaurant we've always wished was in Shreveport, and it's been there the whole time.  Thanks to the Cub, I see far fewer Andouille Crusted Red Snapper dishes in my future.  Thank God for that.