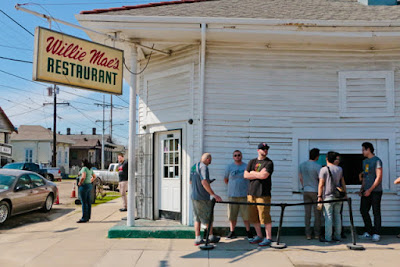 Willie Mae's Scotch House, originally located in Treme, opened as a bar in 1957. After a year, the bar moved to its current location in the Sixth Ward, near Treme and the French Quarter. Willie Mae's Scotch House originally featured a bar, a barbershop, and a beauty salon in the front. By the 1970s, however, the beauty salon closed, and taking advantage of the available space owner Willie Mae Seaton expanded the bar into a full-service restaurant.

The restaurant quickly became famous for its soul food and especially its fried chicken. Fried chicken is something of a New Orleans speciality thanks to the efforts of Willie Mae's and Al Copeland and the creation of Popeye's. The restaurant garnered national attention in 1995 when the James Beard Foundation awarded Willie Mae's with an award for "America's Classic Restaurant for the Southern Region."  The fried chicken often appears on lists of America's best fried chicken. The restaurant continued to grow in popularity until it was nearly destroyed in Hurricane Katrina. As with other famous New Orleans restaurants--like Dooky Chase--Willie Mae's eventually reopened in 2007 thanks to the support of local and national organizations like the Southern Foodways Alliance, an organization devoted to the preservation of Southern food culture. 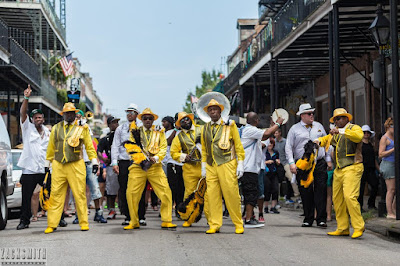 Second lining is one of New Orleans’ biggest cultural traditions. In traditional brass band parades, there is the main or first line—consisting of the band and members of the organization or club sponsoring the parade. Then there is everyone else who follows behind just to enjoy the music or the atmosphere—the “second line.”  Typically those in the second line wave handkerchiefs or twirl parasols in the air. There is frequently exuberant dancing, drinking, and general jollity. New Orleans also has a tradition of jazz funerals with a band parading through the streets. These, however, are more solemn occasions and feature funeral dirges or hymns rather than the upbeat music common to second lines.

Second lining likely derives its origins from traditional West African circle dances where children formed a circle outside the main circle of adult dancers. As with many West African traditions—like the use of spices in food—this second line tradition came via the Atlantic slave trade. African slaves, during their free time, continued to engage in their cultural traditions. As a result, second lining found its way into funeral processions and other group celebrations. While New Orleans’ various slave codes eventually banned such activities since authorities feared that slaves congregating together might eventually lead to resistance or even outright rebellion.

After the Civil War African and African American musical traditions began to merge with white traditions like the brass brand cultural. This fusion gave birth to jazz, among other things. While emancipation meant the end of slavery, it did not mean equality. As whites denied the formerly enslaved access to cemeteries, churches, and other businesses, African Americans created their own. They organized benevolent organizations and clubs. Membership in these clubs included brass bands for funerals and at least one organizational parade per year. The increasing frequency of these clubs led to the development of the second line tradition.

As a result, second lining is most common in the traditionally African-American neighborhoods of Treme and Central City. They, however, can generally be found all across the city. Jazz Fest features a daily second line to introduce visitors to this quintessentially New Orleans’ tradition. Second lines range in size from a handful of people to hundreds or even thousands. Any occasion featuring a brass brand frequently leads to a second line. The past few years at the DGA Family and Friends Crawfish Boil has featured a second line. New Orleans, naturally, has a second line season that lasts throughout most of the year. It takes breaks for Mardi Gras—that’s a whole separate parading season—and during the hottest parts of the summer. Some parades are spontaneous and others are planned. Longer parades often make stops, commonly at bars, with food and drinks for members and participants. Most recently, New Orleanians have held second lines in honor of chef Leah Chase and legendary musician Dr. John—both of whom recently passed away.

So the next time you see a second line, join in!
Posted by Douglas A. Green at 10:00 AM No comments:

New Orleans has long been a center of culinary creativity in the United States, merging the city’s diverse ethnic and culinary traditions into a cohesive whole.  The city has also been at the forefront of preserving the history of food in the United States.  The Southern Food and Beverage Museum, founded in 2004, seeks to explore the culinary history of the American South, including the origins of Southern food and drinks.

The museum’s first exhibit opened in June 2004, at a temporary location, about the history of New Orleans beverages. Later exhibits included an examination of the revival of the New Orleans restaurant scene following Hurricane Katrina. Thanks to the museum’s growing popularity, they found a permanent home at the Riverwalk Marketplace in June 2008. Six years later, in September 2014, the Southern Food and Beverage Museum opened its doors in Central City. The permanent home includes Toups South, a restaurant run by local chef Isaac Toups, an archival research center, and an events space.

The current exhibits include:

The Leah Chase Louisiana Gallery: Named after the restaurant legend who died last week, the exhibit focuses on the food and traditions of Louisiana including beignets, crawfish, jambalaya, and Cajun and Creole cuisine. The Museum is currently pushing for the city of New Orleans to rename Lee Circle in Chase's honor.
Tout de Sweet: All About Sugar: This exhibit looks at the history of sugar in Louisiana and around the world.
Capturing the Coast: Eating from the Gulf: The Gulf of Mexico is essential to the history of New Orleans and its food. This exhibit explores food of the gulf, the history of Gulf fish and fishermen, and the environmental impact of disasters like the Deepwater Horizon Oil Spill.
The Delgado Community College Culinary Arts Program: For years, Delgado Community College has had a thriving culinary arts program that has taught thousands of New Orleanians about the city’s culinary traditions.
Red Bean City: Red beans and rice is inseparable from New Orleans and Camellia Beans tells the story of the rise of the humble red kidney bean.
Creative Kitchen of Al Copeland: Al Copeland was a New Orleans food legend. The exhibit takes guests through his life of creating Popeye’s spicy fried chicken, opening a series of restaurants, famously decorating his house with Christmas lights.
Gallery of the South: States of Taste: Curated by residents of each Southern state, the exhibits highlight the food traditions that are unique but also contribute to a regional “Southern” food culture.
Galatoire's Restaurant: An Exhibit: You can’t tell the history of New Orleans restaurants without discussing Galatorie’s. The famed Friday lunches still require men to wear sport coats and the restaurant doesn’t take reservations. The exhibit features artifacts, menus, and other mementos from over a hundred years of history.
The Menu Project: An ongoing project that collects menus from a wide range of restaurants across the South. The projects traces the trends of the food world, cataloguing the rise and fall of dishes and ingredients, and how they spread across the South.
The next time you visit New Orleans, make sure to carve out some time for the Southern Food and Beverage Museum, it’s well worth the trip.
Posted by Douglas A. Green at 10:00 AM No comments: 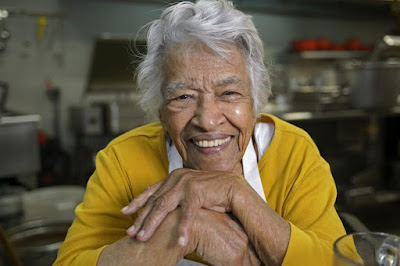 Leah Chase, the famed New Orleans chef and restauranteur, passed away on June 1 at the age of 96.  Born in New Orleans, Chase grew up in Madisonville, Louisiana, the oldest of 11 children. When she was a teenager, Chase moved back to New Orleans to complete high school—since Madisonville did not have a high school for students of color.

After graduation, she worked a variety of jobs including for a local bookie and as the manager of two amateur boxers. She also worked as a waitress at the long-defunct Colonial Restaurant in the French Quarter. In 1946, she married Edgar “Dooky” Chase, a local musician whose parents owned a street corner stand in Treme that sold lottery tickets and po’ boys. In the ensuing years, Edgar and Leah began converting the stand into a full-service restaurant. Leah took over the kitchen and combined her experience helping out on her family’s farm growing up and her time spent in the service industry to create a menu deeply rooted in the New Orleans culinary tradition. 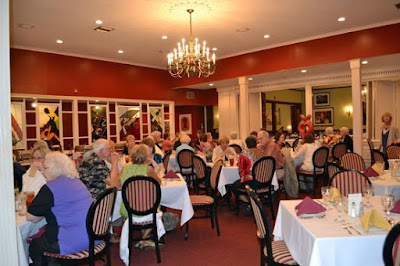 During the Civil Rights era, the restaurant, now named Dooky Chase after her husband, hosted African-American and white leaders. Local civil rights leaders A.P. Tureaud and Dutch Morial often met at Dooky Chase to plan protests. In the upstairs meeting rooms, Martin Luther King Jr. and the Freedom Riders organized the Montgomery Bus boycott based on the work of Baton Rouge activists. All the while, Chase participated in these discussions and served everyone gumbo and fried chicken. The Chases hosted voter registration campaigns, NAACP meetings, and a myriad of other activities. Police and city authorities, meanwhile, refused to interfere with the meetings or close down the restaurant. The restaurant served as a neutral ground for city authorities and activists and shutting it down would only enrage the community further.

Over the years, Dooky Chase Restaurant began a local institution in the African-American community of New Orleans. The Chases patronized local artists and musicians, hanging their art in the restaurant and invited them to play. The restaurant also became known for its Holy Thursday tradition. Leah Chase would prepare her famous gumbo z’herbes—a meatless gumbo made from various greens—and fried chicken.  Chase found that food had a remarkable power to bring people together. As she explained, "Food builds big bridges. If you can eat with someone, you can learn from them, and when you learn from someone, you can make big changes. We changed the course of America in this restaurant over bowls of gumbo. We can talk to each other and relate to each other when we eat together."


Dooky Chase Restaurant flooded during Hurricane Katrina. Leah Chase, now in her 80s, lived across the street in a FEMA trailer for over a year while she and her family worked to raise money to rebuild the restaurant. After reopening, Chase and her family ran the restaurant under limited hours to prevent Chase from overworking herself. She won about every culinary award imaginable both in New Orleans and across the country. She was the inspiration for the Disney film The Princess and the Frog. Chase famously stopped Barack Obama from trying to add hot sauce to her gumbo.

Chase was a New Orleans legend, not only for her food, but for her activism, belief in civil rights, her support of local artists and musicians, and her unwavering belief that food could bridge the differences between people.
Posted by Douglas A. Green at 10:00 AM No comments: