The French, Spanish, German, Haitian, West African, Caribbean, Vietnamese, and other ethnic groups that have settled Louisiana in the past three hundred plus years have fused together to create a culture unique to Louisiana. In honor of the Christmas season, let's talk about a Louisiana tradition: Christmas Eve bonfires.


On Christmas Eve, and more generally in the month of December, residents of Louisiana who live along the Mississippi river, especially between New Orleans and Baton Rouge, construct bonfires on the earthen levees that surround the river. Most of the time, the levees protect the surrounding homes from flood waters. These areas of high ground also make them prime locations for the construction of bonfires. Tradition holds that the bonfires are intended to help Santa Claus—or as the Cajuns call him Papa Noel, because of course the Cajuns have their own name—find his way to the homes of residents of Southern Louisiana. Louisianans construct wooden pyramid like structures, with smaller support logs that give them the appearance of fences. This is the typical appearance for one of these structures, but over the years people have become more artistic in their creations. Many pay homage to Louisiana’s culture, taking the shape of famous plantation homes, paddleboats, or even the ubiquitous crawfish. St. James Parish, located about 30-40 miles upriver from New Orleans, has the heaviest concentration of bonfires, especially in the towns of Gramercy, Lutcher, and Paulina. Lutcher even hosts the annual Festival of the Bonfires at Lutcher Recreational Park where they feature live entertainment, food, local crafts, and of course, bonfires. 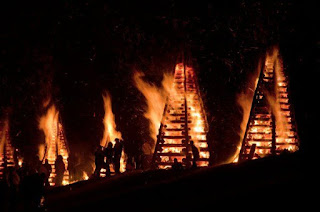 The origins of the Christmas Eve bonfires are not entirely clear. French and German immigrants settled in St. James Parish in the early 18th century. One theory holds that these settlers continued European traditions of holding bonfires on or around the winter and summer solstices after they established themselves in Louisiana. These original pagan practices were incorporated into Christian beliefs as a way of smoothing the way for conversion. The historical record, however, does not support the claim of a widespread practice of bonfires until the 1920s and 1930s. Groups of young men formed bonfire clubs, where they cut down trees, stripped them of their branches, and dragged them to the levees. After constructing the pyramid-like structures, people filled with rubber tires and other flammable materials. After World War 2, the bonfires grew in popularity due to the development of St. James and the surrounding river parishes. And in a rare victory for environmentalism in Louisiana, local governments banned the burning of rubber tires and other toxins—recognizing that they were bad for people’s health. Now these events serve as important cultural and communal events. As with many of Louisiana’s great traditions, they provide an opportunity to listen to music, eat delicious food, and for people to come together as a community and celebrate the holiday season.
Posted by Douglas A. Green at 10:00 AM No comments:

Christmas at the Roosevelt

The Roosevelt Hotel in New Orleans is known for many things--the famous Sazerac Bar, Domenica, the hotel's pizza and Italian restaurant, among others.

At Christmas time, the Roosevelt becomes a winter wonderland in the heart of New Orleans. Take a look at the video below to see the hotel transform itself.


Watch this video to see the Roosevelt in all its Christmas glory.

Christmas at the Gaylord Texan 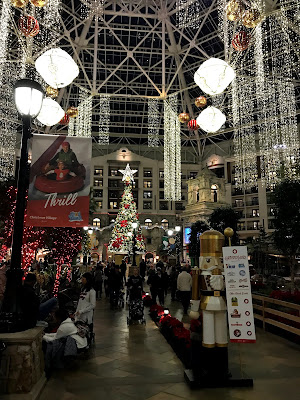 The Gaylord Texan is a mammoth all-inclusive resort located in Grapevine, Texas, just outside of Dallas. Its amenities include a 25,000 sq ft spa, indoor and outdoor pools, five acres of gardens, a seasonal water park, a convention center, four restaurants, a bar, an on-site night club, and a café. The Gaylord has over 1,600 guest rooms and 152 suites. The Texas themed atrium includes a replica of the San Antonio Riverwalk.

At Christmas time, the Gaylord offers a host of holiday activities for families. The highlights begin with ICE! a holiday ice exhibit carved from 2 million pounds of ice. Kept at a chilly 9 degrees, the 14,000-square-foot exhibit hall features scenes from Charlie Brown’s Christmas. Carved over the course of several months by more than 40 ice sculptors, ICE! also features ice slides for participants to slide down. It also includes one-and-a-half million twinkling lights, 12,000 ornaments, a 52-foot-tall rotating Christmas tree, and a life-sized gingerbread house. 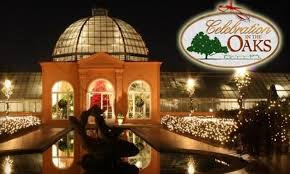 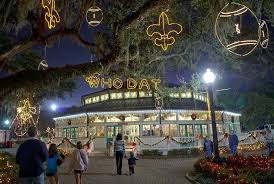 Currently, the Celebration features nearly 600,000 lights, attracting over 165,000 people per year. The fundraiser provides 13% of City Park’s yearly operating budget. It opened on the Friday after Thanksgiving and closes on January 3. It’s a New Orleans holiday tradition that is not to be missed.
Posted by Douglas A. Green at 10:00 AM No comments: