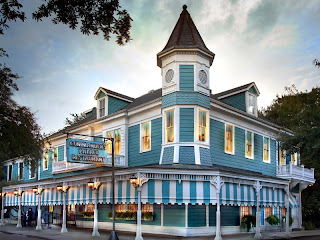 Commander’s Palace ranks as perhaps the most famous restaurant in New Orleans. The restaurant, opened in 1880 and located in New Orleans’s upscale Garden District, has been a hallmark of the city’s rich and diverse culinary landscape. Over the years Commander’s has launched the careers of New Orleans chefs such as Paul Prudhomme and Emeril Lagasse. Its legendary service, beautiful interiors, and tradition of Creole food testify to the longevity of this venerable New Orleans culinary institution.

My wife and I dined at Commander’s on New Year’s Day. She had been there multiple times as a child for family dinners, while this was my first time. Again we decided to order the tasting menu with wine pairings. The meal featured some strong flavors although the portions were a bit too large for a traditional tasting menu. My wife did not finish most of her courses for a fear of getting too full. 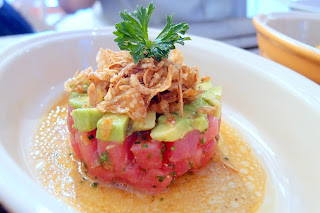 1st Course: Wild Yellowfin Tuna Poké, #1 Yellowfin tuna, crispy plantain, petite herbs, Louisiana soy beans, and Hawaiian poké sauce
This was a flavorful dish with the plantains especially standing out, but it seemed like an odd choice. I expected a more traditional dish at the home of haute Creole cuisine. 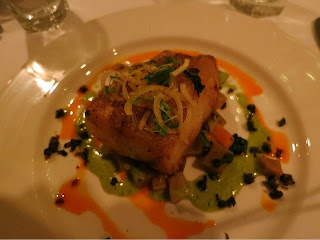 2nd Course: Bone Marrow Roasted Gulf Fish, Crab boiled artichokes, eggplant, smoked tomatoes, and sliced olives with crispy capers & tarragon butter
I liked how the fish in this course played off the fish in the previous course. The roasted fish had a nice firm texture compared to the delicate texture in the poké.

3rd Course: Wild Game Bird Cassoulet, Game bird confit, heirloom legumes, smoked sausage, a “5 Hour Egg,” and gizzard jus
The 5 Hour Egg, cooked in an immersion circulator for 5 hours at 141 degrees created an egg whose whites and yolk had the same consistency and provided a rich sauce for the cassoulet. The cassoulet also featured black eyed peas, a southern tradition (that I was unaware of) meant to bring luck and prosperity in the new year. 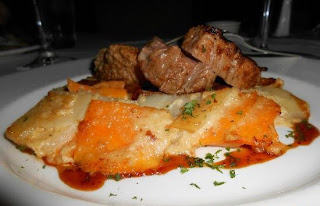 4th Course: Chestnut Crusted Sweetbreads & Hand Carved Veal, a selection of wild winter mushrooms flambéed with caramelized garlic & Hennessey cognac over creamy goat cheese stone grits with black truffle jus
This was the first time I’ve eaten sweetbreads (traditional made of organs or other less desirable parts of the animal) and they were quite tasty. The flambéed mushrooms offered some nice earthiness to accompany the proteins.

5th Course: A selection of artisanal cheese, Pecan biscotti, seasonal fruit, and red wine syrup
The pecan biscotti served as a crunchy and firm base for the cheeses. This was another example of the traditional French rather than Creole nature of the tasting menu.

6th Course: A Tasting of Chocolate, Dark chocolate ice cream, chocolate tuile, and European dark, white, & gianduja chocolate with chocolate covered espresso beans
The dessert course was a lovely way to show off chocolate in a variety of ways. The chocolate tuile gave the course a salty element. 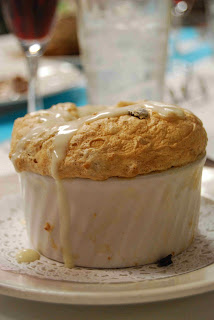 Bread Pudding Soufflé: Order it. No questions, no debate, just order it. And don’t skimp on the whiskey sauce.

Service and Décor: The service was superb; formal, but friendly and attentive. The menu was paced well and the servers were receptive to questions and knowledgeable about the food and the wine. The décor was welcoming and warm. Commander’s was definitely an experience and one well worth having.

Overall, Commander’s Palace offered wonderful service in a classic Creole atmosphere, while supremely delicious, the food seemed to meander away from the restaurant’s Creole roots to more tourist pleasing fare.
Posted by Douglas A. Green at 6:00 AM No comments:

If you are ever in New Orleans in the month of August, no doubt you will be incredibly hot.  But, no worries, every negative comes with a positive.  During the month of August, several restaurants in New Orleans participate in a program called COOLinary.  The COOLinary program is organized by the New Orleans Convention and Visitor's Bureau in order to encourage locals and tourists to brave the heat and humidity and patronize local restaurants in the off season.

Participating restaurants offer great discounts and tasting menus, so it is an excellent opportunity for locals and visitors alike.  COOLinary has over 50 participating restaurants offering both lunch and dinner options.  For lunch, across the board you get 2 courses for $20 or less and for dinner you can get 3 courses for $35 or less.  It really is an amazing deal, especially considering the wealth of fabulous NOLA restaurants that participate.

The great thing about COOLinary is that run of the mill chain restaurants are not the main participants.  The restaurants included are real New Orleans classics and they don’t skimp on the menu choices.  Restaurants that participate include favorites such as Arnaud’s, Antoine’s, Bourbon House, Dickie Brennan’s Steakhouse, Galotoire’s, K-Paul’s Kitchen, Muriel’s, The Pelican Club, and many more. 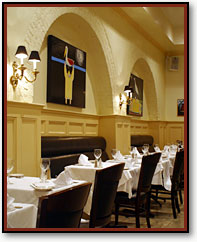 Ryan and I recently headed out to the city for a weekend “staycation” and took advantage of the Coolinary program.  Amongst a long weekend of excess, we dined at the swanky New Orleans Pelican Club.  The Pelican Club is located in a beautifully refurbished French Quarter Townhouse on the corner of Exchange Alley, right by the Green Goddess.  The Pelican Club serves up a menu of traditional Nawlis dishes with creative twists, and is well worth a visit if you are in the Quarter. 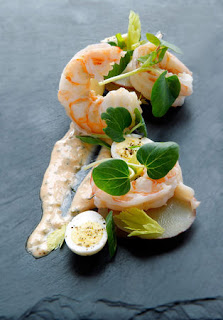 Ryan and I started with classic New Orleans dishes.  I had seafood gumbo and Ryan had the baked oysters, a specialty at the Pelican Club.  We both had fliet mignon, and finished with crème brulee and  sorbet respectively.  Overall, the dinner was fantastic and very well priced.  We even added wine pairings for a meager 20 bucks.

If you go for a weekend in New Orleans, COOLinary is a great way to experience all the classic restaurants without spending a fortune.  It is the perfect time to visit the city if you are interested in focusing on the culinary scene.  You can easily arrange a smorgasbord of top quality dining experiences without having to worry about being able to get reservations and without running up an astronomical bill.  In fact, if you have time for two visits to New Orleans, it is well worth it to do most of your eating during COOLinary.  You can see the sights in March, and run around enjoying New Orleans staples like the Camellia Grill and the resurgent seafood scene on the lake front, and take a trip through NOLA fine dining in the off season.
Posted by Douglas A. Green at 11:41 AM No comments:

The second stop on our NOLA Snowball tour is a popular snowball spot on the Northshore of Lake Pontchartrain: Papa Sam's.

Papa Sam's is a Mandeville institution.  The stand has been around for as long as I can remember, and has always had a large and dedicated following.  The Papa is located on the Highway 190 service road on the edge of a large residential area between Highway 22 and I-12.  For those of you not intimately familiar with Northshore geography, this means Papa Sam's enjoys a superb location that is close to the highway, but can be easily and safely accessed by foot or bicycle. 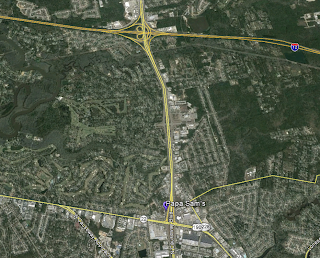 Papa Sam's immediately jumps out with its new bright blue paint job and yellow umbrellas.  There is adequate seating, but the stand suffers from a cramped and awkward parking area.  During busy hours, it can be easier to park on one of the nearby residential streets and walk over. 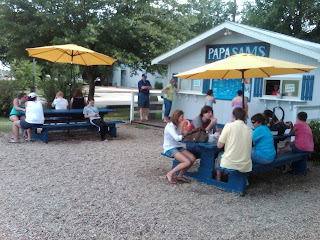 What really distinguishes Papa Sam's is the flavor selection!  Papa Sam's has just about every snowball flavor and option you can imagine from a wide selection of cream flavors and toppings to unique offerings like the Mandeville Skipper (a personal favorite).


The Mandeville Skipper is really just shorthand for a particular two flavor snowball.  Getting two flavors is at any snowball stand is common practice, and many people develop their own preferred blends.  A two flavor snowball is constructed by the simple expedient of pouring one flavor of syrup onto one side of the snowball, and a second flavor onto the opposite side.  It can be tricky to do well, but Papa Sam's excels at it.


The Mandeville Skipper is half Blue Bubblegum and half White Wedding Cake; a combination that sounds terrible according to my wife, but which I absolutely love.  The flavors pair well because both are very sweet, but Blue Bubblegum is sharp and immediate, whereas White Wedding Cake has a richer, more creamy flavor that is subtle and hangs around the palate longer.  In combination, you get a rich, sweet snowball with plenty of kick without being tart or cloying.

Papa Sam's hires friendly and efficient staff, and is generally very consistent in terms of quality.  Sam's uses just the type of ice I prefer: closely shaved without being powdery.  This gives you some texture without being mushy.  Sam's is also generous with the syrup, although my wife feels that they could be more generous with the condensed milk (Liz never thinks anyone uses enough - I keep telling her to ask for double).

There is one quirk about a Papa Sam's snowball.  The straw is usually jammed with a slug of ice that you have to clear before you can use it.  I think this comes from putting the straw into the snowball before the syrup, but I cannot swear to it.  Nevertheless, it is a small quirk that adds a bit of character. 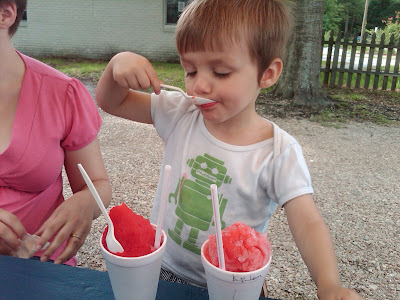 Liz got White Wedding Cake with condensed milk, Ieuan got Red Raspberry, and I got a Mandeville Skipper and a Red Cotton Candy.  All four were well-made thoroughly enjoyed.  I have to say that prior to writing this I had not been to Sam's very often.  I was a Yummies man, of course, much to the chagrin of my co-workers.  But having sampled plenty of snowballs in an effort to find a new go-to stand, I have to say that Papa Sam's came out on top! 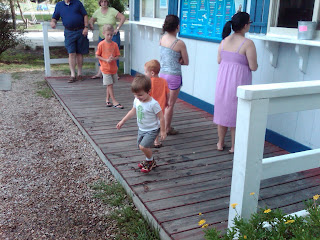 Ieuan also enjoyed splashing in the puddles, which ended in a screaming meltdown of epic proportions
Posted by Douglas A. Green at 12:55 PM No comments: