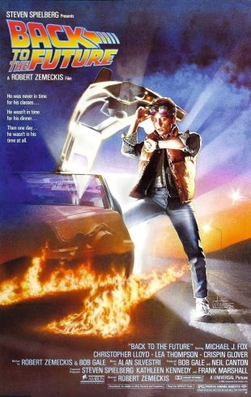 The Back to the Future movies are a staple of 1980s. Millions of millennials grew up watching and quoting the films. Doc Brown and Marty McFly have become enduring lexicons in pop culture. Revisiting the films today, they reflect the era in which they were made and also remain supremely entertaining.

The plot of each film has a similar structure. At the beginning of Back to the Future Part 1, Marty McFly listens to his mother, Lorraine, explain how she met George, her husband, an event that Marty interferes with shortly thereafter. In Part 2, Marty and Doc head into the future, but then must travel into the past to fix the broken timeline. As soon as Doc Brown mentions his affinity for the Old West he winds up living there. The films also share similar touchstones; chase scenes, Marty getting knocked out, and a member of the evil Tannen family covered in manure. Each successive scene echoes the previous ones but are never carbon copies of one another.

Back to the Future offers clearly defined villains who always pay for their crimes. Biff Tannen and his relatives, Buford “Mad Dog” Tannen (his great-grandfather) and Griff (his grandson) harass the McFlys across generations. Biff is first shown bullying George after crashing George’s car. Biff exclaims, “I can’t believe you loaned me a car and didn’t tell me it had a blind spot!” After George knocks Biff out in the new 1955, Biff cowers around George, but flashes his anger at others. The alternate 1985 shows Biff operating with impunity. He admits to Marty that he murdered George in order to marry Lorraine and reminds him, “Kid, I own the police!”

In 2015, Griff and his gang terrorize the downtown of Hill Valley while attempting to kill Marty. Only after Griff and gang crash into the courthouse do the police attempt to interfere.

Buford “Mad Dog” Tannen, featured in Back to the Future Part 3, is similarly violent. He’s quick to anger, attempting to kill Marty after being called “Mad Dog.” He’s dumb, forgetting how to count to ten. The Tannens, however, always seem to get their cosmic reward, landing in a pile of excrement and screaming, “I hate manure!”

The product placement and depictions of future technology within the trilogy reflect the cultural values and concerns of the 1980s. The films present consumerism as quintessentially American. Marty McFly always orders (and receives) a nice cold Pepsi. Texaco will fill your car with gasoline in 1955 and havoline in 2015. A fresh Pizza Hut pizza—hydrate level 4 please—is only seconds away in your Black & Decker food hydrator. Mattel skateboards and hoverboards keep the youth of America entertained. Marty sports stylish Nikes, communicates via AT&T, and his son relaxes by watching six channels at once. In 2015, Marty works for a Japanese firm, typifying the 1980s concern about Asian economic supremacy. Marty hangs out in the Café 80s, a nostalgia driven restaurant. There are fax machines in every room. The people may change, but American brands endure.

The trilogy’s treatment of Marty’s girlfriend, Jennifer Parker, is also problematic. Jennifer appears in the beginning of Back to the Future Part 1 in the role of supportive high school girlfriend. At the end of the film, Doc demands Marty and Jennifer come with him to the future. Jennifer naturally has a lot of questions about her future, although most are stereotypical and demeaning towards women. She wants to see her wedding dress! Her house! Her kids! Immediately annoyed by Jennifer, Doc Brown drugs her and leaves her in an alley so he and Marty can get to the business at hand—saving Marty’s son.

Doc insists that Jennifer will be fine, as anyone left unattended in a strange alley would be. Doc then disappears to intercept Marty Jr. and then goes to pick up his dog, Einstein. So why couldn’t he keep Jennifer in the car? After thwarting Griff, Doc and Marty have to go rescue Jennifer after she’s discovered by some 2015 policewomen. They naturally assume she might be in need of aid—after all she’s been drugged and left passed out amongst a pile of garbage. Marty then returns her to 1985 and she remains out of sight until Marty returns from the Old West.

In Part 1, Marty’s plan to reunite his parents involves him making unwanted sexual advances towards his own mother. After interfering in the original meeting between George and Lorraine, Marty is now the object of his mother’s desires. He agrees to take her to the “Enchantment Under the Sea Dance” where she and George kissed for the first time. To make sure that George will take his rightful place as Lorraine’s love interest, Marty proposes to become sexually aggressive with her, allowing George to interfere and play the hero. This entire plot also reveals Lorraine’s total lack of agency in deciding her own future. She is apparently fickle enough to fall in love with just about anybody (except for Biff). Even though the plan is his idea, Marty recognizes that there’s something deeply disturbing about putting the moves on his own mother. Biff Tannen, however, interrupts their liaison and  has no qualms about attempting to rape Lorraine. George, however, arrives and knocks Biff out, rescuing her.

In an ordinary world, Dr. Emmett Brown would raise red flag after red flag. First, in order to power his time machine, he steals plutonium from a group of Libyan nationalists, who had hired him to build them a nuclear bomb. How Brown came into contact with a terrorist group certainly raises some questions. Why he thought that stealing their plutonium was a good idea is even more troubling. The Libyans demonstrate their willingness to kill anyone who double crosses them, gunning down Doc in the parking lot of the Twin Pines Mall. 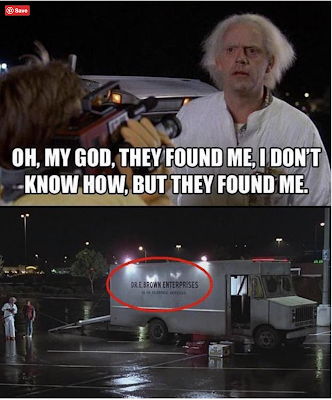 After Marty purchased Gray’s Sports Almanac to win some money on the side, Doc chides him about using the time machine for personal gain. Yet the entire premise of coming to 2015 was for Marty’s personal gain—preventing his son from going to jail.  Only after Marty’s girlfriend Jennifer runs into her future self, Doc decides that he needs to destroy the time machine. In all the years of constructing a time machine Doc never considered its implications. He notes that “The risk is just too great as this incident proves. And I was behaving responsibly! Just imagine the danger if the time machine were to fall in the wrong hands!” Worse than a scientist who collaborates with terrorists and uses time travel to fix the family of his teenage best friend? To top off his temporal irresponsibility, after swearing off time travel forever, Doc builds a second time machine to return to 1985. His purpose? To give Marty a picture and to pick up his dog. In the alternate 1985 Doc Brown had been institutionalized, maybe the real 1985 should have been too.

After returning with a note from the future, Jennifer asks Doc why it’s been erased. He implausibly, but persuasively states the thesis of the entire series. He tells Jennifer that “Your future hasn’t been written yet, no one’s has. So make it a good one.”
Posted by Douglas A. Green at 10:00 AM