A Strange Night at the Opry 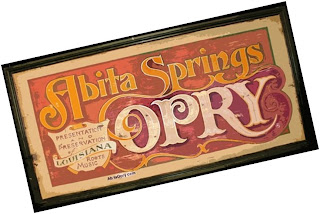 As Benson indicated in his blog post on Friday, the Abita Springs Opry put on its second show of the Fall season last night.  It was a strange one.  There were many empty seats for no apparent reason.  As for the DGA group, it ended up being just Benson and me.  Lots of us are on the road.  However, we primed ourselves in the traditional manner with dinner at the Abita Brew Pub.  Benson had a Restoration Ale – his favorite and a mighty fine brew at that.  I had a Jackamo IPA – or three.
Being appropriately primed for the evening, we enjoyed the house band, The Pot Luck String Band.  Van Glynn leads this band on fiddle and occasionally mandolin.  He is a talented musician, but also something of a music historian.  Joining the band last night was a special guest from Nova Scotia and the theme of the set was Acadiana Roots Music.  As most everyone knows, the Cajun of Louisiana were evicted from Nova Scotia following the French and Indians war in the late 18th century.  There was a distinctive Irish note to the music and it was quite enjoyable.  More on that later. 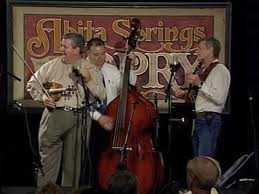 Well, the next two sets had us wondering whether the house band was going to be the star of the show.  What followed were two country and western cover bands, the latter of which came off as a corny, urban cowboy, bar band, replete with jokes and props.  The only thing missing was the cowboy hats.  When the lead broke out with a cover of Willie Nelson’s, On The Road Again, it was sad and depressing.  And, not in a good way.  But, the ultimate sin was the female vocalist, who was not bad otherwise, covering Patsy Cline’s famous, I Fall to Pieces.  I’m sorry, but that’s like trying to cover Freddie Mercury.  Ain’t gonna happen.  Benson had one comment on both groups – “that was a little weird.”
Alas, the night was saved when a scrub board appeared on the stage.  The final act was Jockey Etienne and the Creole Zydeco Farmers.  They hail from the area north of Lafayette around Opelousas.  That’s Cajun Country for those of you unfamiliar with the state.  It’s in the Atchafalaya basin, but generally high land with nothing but farms.  And, yes, the members of the band are real farmers.   They started the show with the classic, Don’t Mess With My Toot Toot.  But, the R&B and Blues roots of the band quickly came through as Selwyn Cooper on electric guitar picked his way through some very fine rifts.

Zydeco is a form of uniquely American roots or folk music.  It evolved in southwest Louisiana in the early 19th century from forms of "la la" Creole music. The rural Creoles of southwest Louisiana and southeast Texas still sing in Louisiana Creole French.  Creoles do not consider themselves part of the black culture, but rather a mixture of Haitian, Native American, French, and Spanish known as "Quadronne" or "four-way." 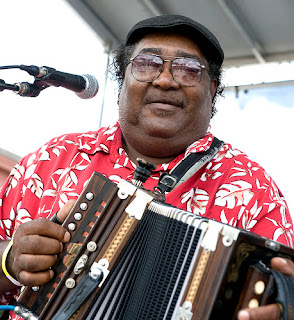 Zydeco combines elements of an even older American musical style, which began in the late 1700s: Cajun music, which comprises French fiddle tunes, Irish Celtic fiddle tunes, German button accordion, Latin rhythms, and Appalachian styles.  Go back up to my earlier discussion of the first band of the night and you will see those Irish influences.  Now, your lesson for the day is that Zyeco and Cajun music are related, but not the same.  The other major influence in Zydeco is another uniquely American music style: blues, and rhythm and blues.  Haitian rhythms were also added, as Haitian natives moved to Louisiana to help harvest the new cash crop - sugarcane.
Zydeco (French, from the phrase: "Les haricots ne sont pas salés", means "the snap beans aren't salty". This phrase has been referred to as meaning "I'm so poor, I can't afford any salt meat for the beans." When spoken in the regional French, it is spoken thus: "leh-zy-dee-co sohn pah salay...") 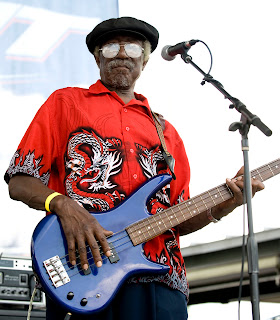 The first zydeco song was called "Les Zydeco es Pas Salee". Zydeco music pioneer Clifton Chenier, "The King of Zydeco", made Zydeco popular on regional radio stations with his bluesy style and keyboard accordion.
Usually fast tempo and dominated by the button or piano accordion and a form of a washboard known as a "rub-board," "scrub-board," "wash-board," or frottoir, zydeco music was originally created at house dances, where families and friends gathered for socializing. 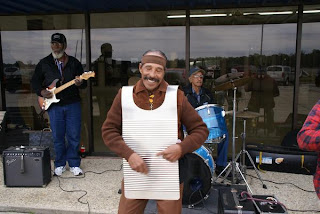 The members of the band are, Warren Prejean - Accordion, Wlliam Layssard - Rubboard, Clarence "Jockey" Etienne - Drummer, Charles Goodman - Bass Guitar, and Selwynn Cooper – Guitar.  If you have a taste for good Zydeco, look up these guys.  They got a big standing O from the appreciative audience.
The final show of the Fall 2011 Opry season is November 19th.  The show will feature Wardell Williams, a member of the Louisiana Music Hall of Fame, the Fugitive Poets, a blues band, and the Zion Harmonizers.  Ahh, they save the best for last.  If you are interested in listening to past performances, hit the web site, www.abitaopry.org and click on the link.  If you want to listen live, I have tickets!
Posted by Douglas A. Green at 8:49 AM