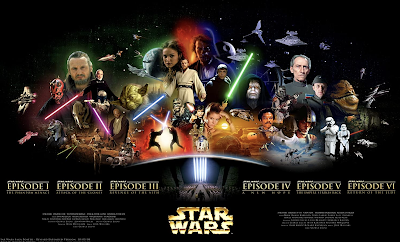 A few years ago, we offered a ranking of the best Star Wars movies. Now that the sequel trilogy is complete--along with two standalone movies. It's time to update those rankings. Here we go.

1. The Empire Strikes Back: Embracing a darker tone, Empire pushes deeper into the emotional core of its characters. There’s more Han-Leia banter as the two grow to realize that they can’t stand one another but also love each other. Luke starts training to be a Jedi and risks turning to the dark side to save his imperiled friends. Darth Vader is back and more determined than ever to crush the rebellion. The Battle of Hoth rivals the destruction of both Death Stars for its scale and staging. Then there’s the famous, “No, I am your father” scene. And Han’s “I know” response to Leia’s declaration of love as he’s about to be frozen in carbonite. Sci-fi doesn’t get much better than this.

2. The Last Jedi: Rian Johnson's revisionist take on the Star Wars universe dared viewers to leave the past behind and kill it if they had to. Toxic fanboy objections aside, Johnson created a visually daring film that is so stuffed with ideas that it is both too long and too short at the same time. The brave and foolhardy actions of reckless and selfish men find themselves under examination as a gallery's worth of prominent women show their male counterparts just what leadership really looks like. And it's not sulking in exile for 20 years or jumping in the seat of an X-Wing and getting half your fleet killed. It's a story of sacrifice and passing down hard-earned lessons to a new generation of heroes.

3. A New Hope: All these years later, A New Hope remains an enjoyable viewing experience with Luke Skywalker’s heroes’ journey from farm boy to galactic savior. Harrison Ford and Carrie Fisher shine as Han and Leia. Alec Guinness lends his considerable gravitas to his role of Obi-Wan giving the film an air of seriousness and depth. As was shown in the prequel trilogy, George Lucas’s clumsy dialogue sounds a lot worse in the hands of lesser talented actors. The climactic attack on the Death Star remains one of Lucas’s best directed set pieces of the entire series. There are a lot worse ways to spent two hours than revisiting this classic movie.

4. Rogue One: Director Gareth Edwards has an impressive grasp of scale. He frames a Star Destroyer in the foreground with the installation of the Death Star’s super-weapon in the background. Rebel fighters crash into the front of a Star Destroyer exiting hyperspace. The film’s climatic hour succeeds where Force Awakens failed, by creating clear stakes for each part of the battle to retrieve the Death Star plans. Unfortunately, the film’s first half suffers from underdeveloped characters and a grueling slog from anonymous planet to anonymous planet that reeks of reshoots and a desire to make a film where everyone dies at the end into a family friendly adventure.

5. Force Awakens: The Force Awakens benefits from strong casting and character work as well as being competently entertaining following the under-baked prequel trilogy. Tasked with introducing a new cast to go alongside the old veterans, director J.J Abrams more or less made a carbon copy of a A New Hope, which isn’t the worst thing in the world, but limits the film’s upside. The plot of the last hour or so takes a backseat to character work as there’s another bigger, badder Death Star but without any of the tension or stakes that came from blowing up the first two Death Stars. Abrams, however, moved the franchise in a positive direction by creating likeable and relatable main characters like Rey, Finn, and Poe.
Posted by Douglas A. Green at 10:00 AM