What if I were to tell you that the Great Wall of China was built to repel four legged green aliens that crashed into the side of a mountain in ancient China on top of a meteorite? And what if I were also to tell you that the only thing stopping their attacks (which occur every sixty years) was a secret color-coded Chinese army and Matt Damon? Well, that is the plot of director Zhang Yimou’s The Great Wall. Yimou, however, never fully embraces the film’s bonkers premise. Instead of developing coherent characters or a somewhat logical plot, he immerses himself in pageantry and Chinese nationalist themes of cooperation, imperial corruption, and heroic sacrifices for the greater good. 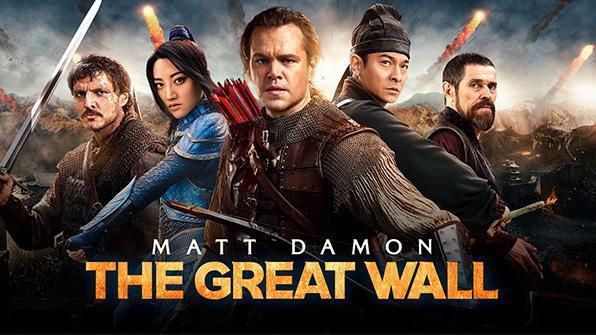 No one in The Great Wall is playing anything resembling an actual person. Matt Damon’s character, William, is a generic European in search of gunpowder to bring back to the West. His accent (something vaguely Irish?) shifts between nearly every scene without explanation. William’s partner, Tovar (Pedro Pascal), is from Spain. At one point, he grabs a shiny cape and does his best impersonation of a matador to lure in one of the alien creatures so William can kill it. Chinese actress Tian Jing plays Commander Lin Mae, the leader of an all-female jumping corps, who has devoted her life to fighting the aliens. Luckily though, she speaks perfect English so she and Damon can awkwardly flirt with one another. The rest of the film’s cast is a bunch of stock characters including the wise strategist, the seasoned general who dies a third of the way through the movie, and the coward who redeems himself.

The film’s plot is similarly nonsensical. The Great Wall of China is, as the film’s opening crawl reminds us, is 5,500 miles long and took 1,700 years to build. Yet, the tao tei (the aliens) always attack wherever the Nameless Order (the name of the secret Chinese army) is. Why didn’t they just go ten miles down the road and go over the wall there? The characters constantly remark how much smarter the tao tei are this time, but after thirty-three different attacks they still can’t figure out how to get around a wall. Under or over are generally good options. Additionally, after every attack the Nameless Order unleashes some kind of new and more destructive weapon. They progress from bungee jumping women with spears to flaming cannonballs to gunpowder weapons to giant scissors that cut the tao tei in half to hot air balloons armed with grenades. All of this leads you to wonder, if your mortal enemy only attacks every sixty years, what’s the point of holding back?

The Great Wall, however, is visually stunning. Yimou seems more interested in luxuriating in the colors of the Nameless Order than portraying battle scenes. His camera pans over the yellow, purple, blue, and black clad soldiers marching up and down the wall. Dozens of soldiers bang oversized blue drums to signal the call to battle. Hundreds of arrows, cannonballs, and other projectiles hurtle across the screen all in sync with one another. Yimou uses of all this synchronicity to portray his themes of unity and victory stemming from the cooperation of everyone. Lin Mae has no family, but has risen up the ranks to command the Nameless Order because of her courage and skill. On the other hand, Yimou portrays the emperor as an effeminate young man lashing out at his protectors and hiding behind the throne when the tao tei reach the capital. The emperor is surrounded by a cadre of Confucian intellectuals armed with bad advice and worse facial hair. The imperial order is as much the enemy as the tao tei.


The Great Wall is an absurdly plotted medieval adventure movie—gunpowder blows up everywhere and no one knows how to handle it properly. There’s plenty of green aliens, but no human characters. The film’s nationalist themes are laid bare for everyone to see. But at least it offers something pretty to look at.
Posted by Douglas A. Green at 10:00 AM