New Orleans is known for many things: Mardi Gras, voodoo, its rich history, and perhaps most importantly--its food. So if you're coming to New Orleans for the crawfish boil and you're looking for places to eat in the city, have no worries. We've collected a list of restaurants that show off the culinary legacy of the Crescent City.

Café Du Monde: We’re starting off with the obvious, but sometimes what’s obvious is best. It’s New Orleans, it’s beignets, don’t overthink it. Stroll on down Decatur Street and stop when you see the famous exterior. Go in, order the beignets, and blow powdered sugar on your friends and family. Enjoy a café au laut and watch the world go by. If you walk out of there and you’re not covered in powdered sugar, you’ve done it wrong. 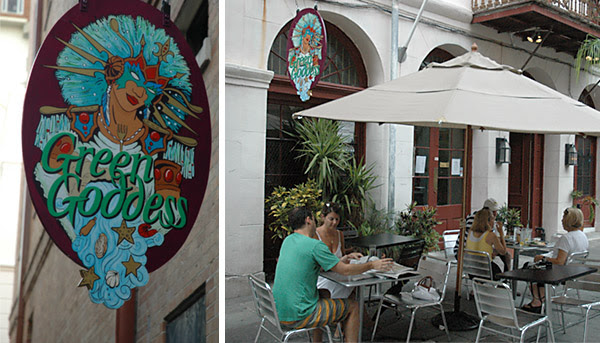 Green Goddess: If you want eclectic modern New Orleans cuisine go no farther than the Green Goddess. Make sure you keep your eye out, it’s tucked away in a narrow alley just off of Bienville Street. The unassuming exterior masks the culinary creativity within. The menu changes with the seasons and takes a global approach, fusing Louisiana classics with ideas from around the world. Benson and his wife Liz swear by the food and the cocktails (especially the cheese plate).

Killer Poboys: Nestled in the back of the Erin Rose Bar is one of the best kept secrets of the New Orleans culinary scene, Killer Poboys. The Poboy is a traditional New Orleans sandwich consisting of some kind of protein, generally roast beef or fried seafood served on New Orleans style French bread (there’s an entire festival devoted to them). Done right, the poboy is a blank canvas for culinary innovation. And Killer Poboys does them right.

Antonie's: Named by historian Paul Freedman as one of the "Ten Restaurants that Changed America", Antoine's has been a French Quarter institution since 1840. This famous restaurant was the birthplace of classic American dishes like Oysters Rockefeller (which is still on the menu today). Much like the city it has come to epitomize, Antoine's has had its ups and downs. It's been a financial success, received critical acclaim, and served as the culinary center of the city. It has also suffered through financial woes, been damaged by Hurricane Katrina, and struggled to make itself attractive to the tourist industry. In the last few years, however, Antoine's has had something of a rebirth under the leadership of fifth-generation owner Rick Blount. If you want to taste authentic Creole cuisine and experience a piece of New Orleans history, eat at Antoine's.

Déjà Vu Bar and Grill: Open 24/7/364, Déjà Vu is the place to go if you’ve been out all night drinking and need some good, filling food. They serve breakfast all day including southern staples like biscuits and gravy. Their menu includes burgers, seafood, and a host of Louisiana classics. Benson also vouches for their beer selection.

Peche: New Orleans chef and restaurateur Donald Link has been on a roll these past few years. In 2006, he opened Cochon, an ode to Cajun cooking, located in the Central Business District. In 2013, Link decided to conquer the New Orleans seafood scene with Peche. The James Beard Foundation named Peche the Best New Restaurant in America in 2014. We've eaten there several times and the menu highlights Gulf seafood at its absolute best.

La Divina Gelateria: And we’d be remiss if we didn’t recommend at least one dessert place. La Divina makes all of their gelato in house and from scratch. The owners, Katrina and Carmelo Turillo lived in Florence and loved taking late night walks and getting gelato. So they decided to study how to make gelato and brought it over to Louisiana. They opened in February 2007 after being delayed several years by Hurricane Katrina. The shop has four locations, including one in the French Quarter. So if you’re talking a late night walk, stop in for some of the best gelato outside of Italy.

Just a reminder: the 10th Annual DGA Crawfish Boil is March 11, 2017 at Maison Lafitte in Mandeville, Louisiana. We hope to see you there!
Posted by Douglas A. Green at 10:00 AM